Semi finals team of the week has been released. Ten(10) Chelsea players makes the team

By Raysportz (self meida writer) | 20 days

After the semi finals of the Emirates FA cup took place, slot of fans has been waiting for team of the week. This time around the team of the week took a while before it was released and to our surprise Chelsea stole the show with ease. Leicester City also defeated Southampton so it was expected that the two clubs will dominate the team but to this extent wasn't thought of. Chelsea's second keeper Kepa Arrizabalaga was the goalkeeper of the week and all Chelsea's back four of the game got their name mentioned due to the solid defence they put up against the league leaders Manchester city. Reece James, Azpilicueta, Thiago Silva and Chilwell in front of the goalkeeper.

Jorginho, Kante and Mount in midfield. Thou Manchester City's midfielders performed very well with the likes of De Bruyne and Foden they couldn't beat Chelsea's midfielders. 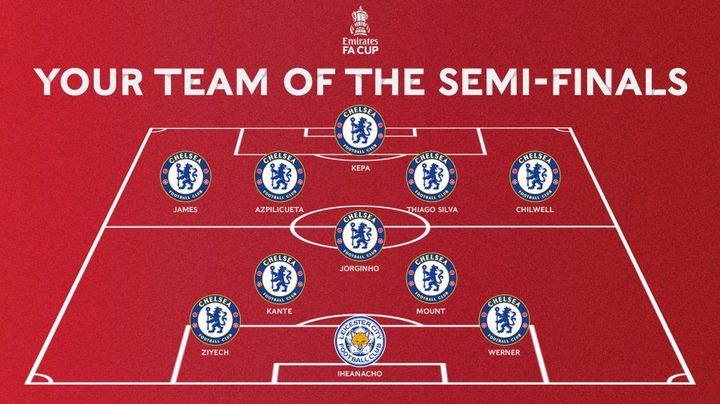 Upfront is where we saw a player from a different. There is no doubt that Iheanacho is currently the most on form striker in the Premier league. He gave Leicester city their winning goal against Southampton to push them to the cup finals. Ziyech and Werner also on the list due to masterclass performance. In total there are 10 Chelsea players and one Leicester city player in the FA Cup semi finals team of the round.