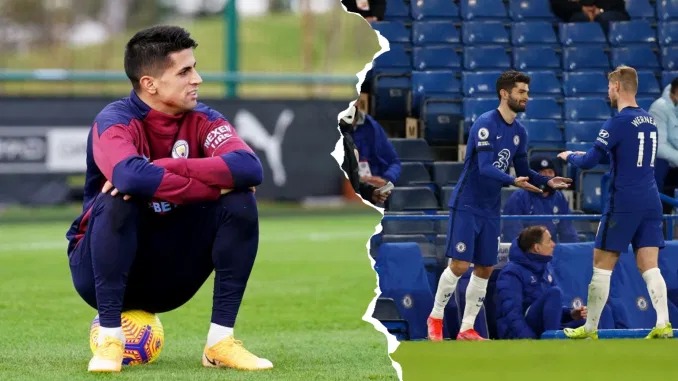 The Portuguese who joined Manchester City in a swap deal has named Chelsea winger as the most challenging winger he has ever faced.

Cancelo managed to become City’s regular right back following his consistence performance since his debut match against Bournemouth.

Speaking in an interview with Metro, Joao Cancelo revealed among the whole opponents he faced since making his €60m worth (including Danilo to Juventus), Chelsea’s Christian Pulisic is the only one he had problems containing.

“I usually chat with my teammates about it,” the versatile back man said.

“It may sound strange, but for me, the most difficult winger I have faced in the Premier League is Pulisic from Chelsea,” he continued.

He is a very skilful and fast player with the ball with quick dribbles. So for me he is the most difficult winger I have played.”

This may come as a warning to Thomas Tuchel who has failed to feature Pulisic in most of his game with the American now disappointedly likely to push for an exit by the end of the season if things doesn’t change at Stamford Bridge with him.

Christian Pulisic is the player in the current squad who embodies attributes closest to that of Eden Hazard with the Blues still missing the presence of the Belgian Maestro since he moved to Real Madrid.

Only 4 English teams can be allowed into the UCL competition and should either of these teams win the UCL or Europa, they automatically have a spot on the next run.

Liverpool are far from top 4 while Spurs and Arsenal are out of the top 4 zone but are considered favorites to win the Europa.

Should Chelsea end the season on fourth place and any of the English team wins the Europa League or the Champions League aside those already in the top 4, then it’s a game over for Chelsea’s next UEFA Champions League hopes, unless they are the one winning the trophy.

Maybe this is the period Tuchel is waiting for in order to unleash Pulisic as he has earlier on mentioned he needs a fully fit squad during the period he featured Kepa Arrizabalaga on 2 straight games.

Pulisic is Tuchel’s favorite and fizzling him out in such a manner is close to something that raised eyebrows but with the tough tasks ahead, we see if Tuchel is waiting to explode Pulisic’s Super Bomb or has permanently forgotten his favorite son.