The just ended 2021/22 Ghana Premier League GPL season, threw up some interesting statistics on penalties awarded to each of the 18 clubs as Asante Kotoko run away with the title.

The Porcupines ended the campaign with a record extending 26th title, and, they also won the most penalties of the competition.

Asante Kotoko won 12 penalties during the campaign with the champions converting eight of those and missing four from 12-yards.

Real Tamale United, RTU, won 10 and converted all, making them the most prolific from the spot during the just ended competition. 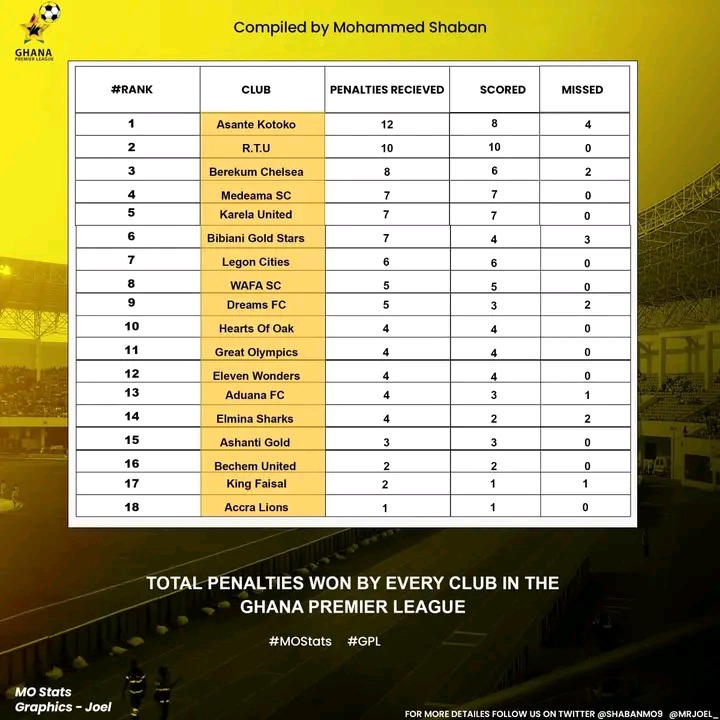 Berekum Chelsea won eight penalties and converted six of them with Medeama SC and Karela United both scoring a hundred percent record from the spot as they converted all the seven spot kicks they won.

Bibiani Gold Stars scored four of the seven spot kicks they were awarded with Legon Cities converting all the six they won.

WAFA had five penalties last season, and, the academy lads scored all with Dreams FC scoring three of the five spot kicks they had.

Both Accra Hearts of Oak and their city rivals Great Olympics converted all the four spot kicks they won as did Eleven Wonders.

Aduana FC and Elmina Sharks scored three and two out of four penalty kicks respectively before the season headed to a close.

AshantiGold SC and Bechem United were perfect from the spot as they converted all their spot kicks; three and two respectively.

King Faisal Babes scored one of the two penalty kicks they had with Accra Lions ending the campaign by converting the only spot kick they had.