Manchester United have recorded their first points of the season with a 2-3 away draw against Brighton and Hove Albion at the Amex Stadium in Brighton.

The game which saw multiple decisions by referee Chris Kavanagh from the VAR gave United their first three points for the season.

First it was Brighton who had their spot kick confirmed by the VAR on the 40th minute when Bruno Fernandes was penalised for a bad tackle. It was coolly converted by Neal Maupay (Brighton) for the host to take the lead at 1-0.

Lewis Dunk scored an agonizing own goal to make the scoreline 1-1 going into the break on the 43rd minute. 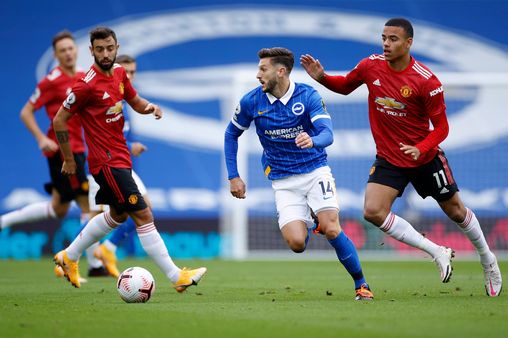 The VAR came in again two minutes after the resumption of the game, this time round denying Brighton another penalty. Paul Pogba, the culprit escaped this one.

Then on the 52nd minute, the VAR was consulted again, ruling Marcus Rashford's goal for being in an offside position, but the English International made it 2-1 three minutes later for the visitors when he displayed superb quick feet to dribble through the defenders of Brighton and took a short from inside the box, which deflected past the helpless Matthew Ryan (Brighton).

Brighton came close to equalising when they hit the post and crossbar in the 60th and 76th minutes respectively.

Five minutes of added time brought the best in the gane. Brighton thought they have scored the equaliser in the 6th minute of added time through Solomon March, but United were determined to win the game as Bruno Fernandes made it 3-2 ten minutes into time added on.

Brighton will travel to Liverpool to meet Everton on 3rd October, while United host Tottenham on 4th October. But the two teams will return to the Amex Stadium on 30th September for the 4th Round of the Carabao Cup.