Steven Gerrard has already reunited with Philippe Coutinho, a former Liverpool teammate, at Aston Villa, and it's now being said that he's set his sights on Luis Suarez. 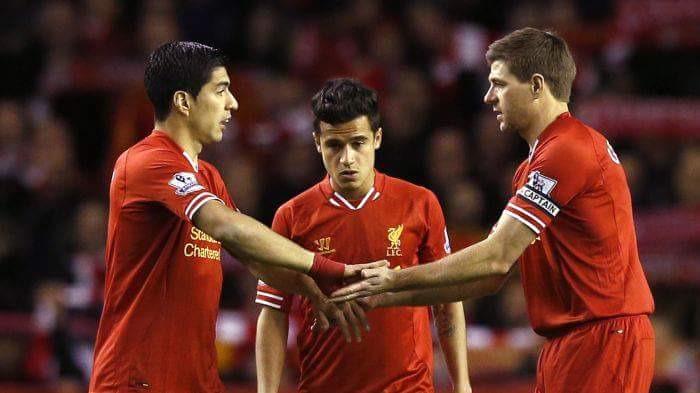 Philippe Coutinho's views on Luis Suarez indicate that he would welcome the striker's arrival at Aston Villa.

With his current term with the reigning La Liga champions set to expire in the summer, the Atletico Madrid striker has been linked with a move to the Midlands club.

However, he has been rotated this season, with players such as Joao Felix, Angel Correa, and Antoine Griezmann vying for a starting spot as Atletico's defense has deteriorated.

Suarez will bring a lot of quality and a winning mentality that Aston Villa are lacking.

Suarez is the complete striker. Similar to a Harry Kane, he scores a lot of goals for any team he is in and helps balance out the team in attack (Helping the team progress forward in attack and score goals).

He also is athletic. A Lot of footballers don’t hold traits like Suarez. Only special players like Ibrahimovic to name a few do. He is also a team player, who is willing to die for any club he plays for.

The MSN (Messi, Neymar, Suarez) era showed, he is not only a player who can play in a different team, with a different format but also use his abilities to help the team win trophies and score plenty of goals. I’ve personally seen Suarez do things a lot of players simply dream about doing.

His work rate and scoring ability is amazing. He has declined in recent years but he is still one of the best strikers in the WORLD.

He managed to do it in two leagues and outshine a lot of big players in both the premier league and la liga. He doesn’t get the recognition he deserves sometimes due to his past behaviour sadly.

Coutinho, a former Liverpool teammate, made an immediate impact on his debut when he came off the bench against Manchester United to score the equalizer and salvage a 2-2 draw. Gerrard has already reunited with Coutinho.

And now he's apparently turned his attention to Suarez, with whom he enjoyed a fantastic relationship during their time at Anfield.

Between 2012 and 2014, Luis Suarez, Philippe Coutinho, and Steven Gerrard all played for Liverpool.

Between 2012 and 2014, Luis Suarez, Philippe Coutinho, and Steven Gerrard all played for Liverpool.

According to rumors in Spain, the Uruguayan forward is "bent" on returning to Villa Park to reunite with Gerrard.

However, according to Mirror Football, Villa do not intend to make a surprise approach for Suarez this month.

When his contract at the Wanda Metropolitano expires in the summer, Gerrard's side could yet contact the former Barcelona star.

Coutinho would undoubtedly support it, since the two remain good friends from their time together at Liverpool and Barcelona.

Suarez arranged for Coutinho's former Reds teammate to live in the same neighborhood as him when he joined Barcelona in 2018.

Coutinho remarked after arriving at the Nou Camp of his off-field friendship with Suarez: "We were both at Liverpool at the time, and he was a huge help to me when I signed with them.

"Other players, particularly those who spoke Spanish or Portuguese (which are comparable languages), were also there.

"We were always together, and it resulted in a wonderful bond."

When it comes to Suarez, Coutinho has been similarly complimentary on the field.

Together, the two have appeared in 106 games for Liverpool and Barcelona.

"Suarez is a wonderful player," he commented during his time on Merseyside.

"It is a privilege for me to be able to play alongside him. It's a lot easier to play with someone like him because he's always moving; he never sits still.

"It is much better to have a player like that when you have the ball because you can open up the defense much more."

Ladies, Here Are 2 Bad Habits That Can Cause Saggy Breasts

Stop Absorbing Other People’s Negative Energy, And This Is How To Do It