There is more riding on Sunday's Milan Derby that just bragging rights. Inter sit top of Serie A by just a solitary point, with AC Milan hot on their heels and any slip up will be capitalised upon. The duo are seeking to break Juventus' monopolisation of Italy's top tier and become the first team that isn't the Old Lady to lift the Scudetto since AC Milan's success in 2011.

As the designated home team, AC Milan haven't won a league Derby della Madonnia since a 3-0 win back in 2016 as the Rossoneri look to leapfrog the Nerazzuri into first. In the build up to this hotly contested Milan Derby, we take a look at the combined XI. The side excludes injured and suspended players, and only those who have made 10 or more appearances come into the reckoning.

It's AC Milan who dominate this team, with eight representatives to Inter's three. Starting between the sticks, it's Gianluigi Donnarumma (6.92) who comes in ahead of Samir Handanovic (6.60). The former ranks among the top 10 players for saves (57) and first for clean sheets (8) in Serie A this season coming into the weekend's Italian action.

At the back, Milan Skriniar (6.88) is the sole Inter representative with the 26-year-old partnering Simon Kjaer (7.04) at the heart of the defence. There are no prizes for guessing the left-back in this team, with Theo Hernandez (7.39) enjoying a superb campaign in an AC Milan shirt, while right-back Davide Calabria (7.11) rounds off the backline. 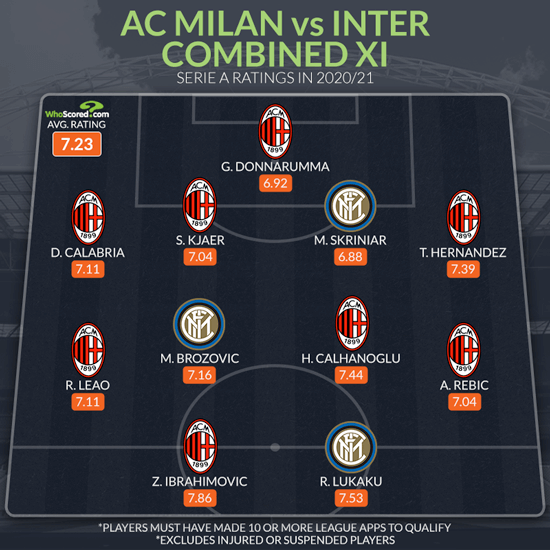 Rafael Leao (7.11) and Ante Rebic (7.04) feature on the right and left flank, respectively, but the star man in midfield is Hakan Calhanoglu (7.44). The 27-year-old has been instrumental in AC Milan's rise to title cotenders having made more key passes (64) than any other player in Serie A this season. Marcelo Brozovic (7.16) joins Calhanoglu in the middle of the park to complete the midfield.

It wouldn't be a Milan Derby combined XI without Zlatan Ibrahimovic (7.86) with the powerhouse Swede the best rated player in Serie A this season. Joining Ibrahimovic on the frontline is goal machine Romelu Lukaku (7.53). No player has scored more goals than the Capocannoniere chasing Belgian (16) ahead of the action in Italy over the weekend and his inclusion means there is no space in the XI for teammate Lautaro Martinez (7.20).