Manchester United ended a lengthy wait to end a gameweek top of the Premier League table, but a 1-0 win over Burnley saw them finish the night first. Rivals Manchester City also feature in the team of the midweek round of games after a 1-0 victory against Brighton to keep pace with the league leaders.

Fulham secured an impressive point at Tottenham on Wednesday night as they came from behind to draw 1-1 at the Tottenham Hotspur Stadium. Alphonse Areola may have conceded in the stalemate, but his five saves ensured the Cottagers returned to west London with a positive result.

The first of four Manchester City representatives after their 1-0 win over Brighton, Joao Cancelo again shone at the back for Pep Guardiola's side. The Portugal international earned a WhoScored rating of 7.58 in the victory, as he got forward well, completing three dribbles, and defended solidly, making two tackles, to help City to their eighth clean sheet of the campaign.

At the 18th time of asking, Sheffield United earned their first Premier League win of the season, securing a 1-0 victory over Newcastle. Ethan Ampadu put in a man of the match performance against the Magpies as the on-loan Welshman excelled to keep the Newcastle attack at bay. Four clearances, four interceptions and three tackles helped the 20-year-old to a WhoScored rating of 8.37.

Partnering Ampadu at the heart of the defence is Everton's match winner Michael Keane. The centre-back scored in the latter stages of the Toffees' 2-1 win at Wolves to contribute towards his inclusion in the team of the midweek round of games with a WhoScored rating of 8.17.

Rounding off the defence is Tottenham left-back Sergio Reguilon. While Spurs couldn't come away from their midweek meeting with Fulham with all three points, Reguilon put in a man of the match display as the Spaniard provided the assist for Harry Kane's first half goal. That assist came from one of two key passes and he defended his side of the pitch well, making four clearances and four interceptions, which saw Reguilon land a WhoScored rating of 7.89.

Alex Iwobi bagged his first league goal of the season in Everton's 2-1 win over Wolves, firing the Toffees ahead with just six minutes on the clock. Iwobi's goal came from one of three shots, while three successful dribbles meant the 24-year-old gave the Wolves defence a torrid time. In addition, the Nigeria international made four tackles as he earned a WhoScored rating of 8.06 at Molineux. 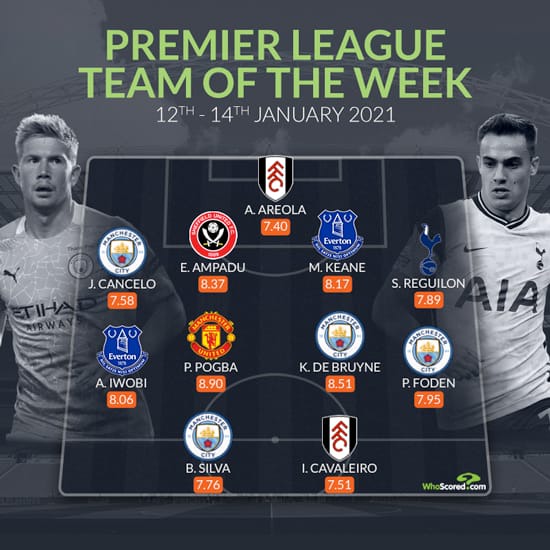 Manchester United went top of the Premier League for the first time in 1221 days with a 1-0 win at Burnley with Paul Pogba bagging the winning goal 20 minutes from time at Turf Moor. The Frenchman hit the back of the net with his only shot on goal and was unfortunate not to register an assist as he made two key passes. Five clearances, two tackles and two interceptions saw Pogba garner a WhoScored rating of 8.90, that enough to land the player of the week award.

Joining Pogba in the middle of the park is Manchester City maestro Kevin De Bruyne, who yielded a WhoScored rating of 8.51 against Brighton. The Belgian registered his ninth assist of the season in a 1-0 win over Brighton, with one of three key passes picking out Phil Foden to net the only goal of the game. Four successful dribbles and three tackles contributed towards his inclusion this week.

Phil Foden scored for the second running game in Manchester City's 1-0 win over Brighton. The 20-year-old hit the back of the net with one of two shots and was unfortunate not to grab an assist as he made two key passes in the victory. A further two dribbles saw Foden return a WhoScored rating of 7.95.

Pep Guardiola has made a habit of playing with no natural striker in recent weeks and he continued that trend on Wednesday as Bernardo Silva led the charge. Silva defended well from the front, making two tackles and two interceptions, and broke past the Brighton backline well, completing four dribbles, to secure a WhoScored rating of 7.76.

Ivan Cavaleiro rounds off the Premier League team of the week after his towering header in Fulham's 1-1 draw at Tottenham. The Cottagers forward picked the perfect time to score his second league goal of the campaign, while two interceptions saw him come away from the stalemate with a WhoScored rating of 7.51.

Content created and supplied by: Quicknews360 (via Opera News )