By HonEhEs (self media writer) | 29 days ago

These are the top Eleven(11) rated players in Seria A-League this week according to statistics on sofa score based on 4-4-2 formation.

Stats: Napoli won on 4-0 against Sampdoria on Thursday night and goalkeeper Ospina shows a very solid performance as he made incredible saves of five(5), three(3) coming inside the box, and passes accuracy of 68%.

Stats: Theo played only 31 minutes and yet he was named in the team of the week. He had two(2) shots on target which resulted in a goal and an assist. He also made a tackle, a key pass, and a pass accuracy of 96%.

Stats: Genoa played a draw against Bologna and player Bani made a standout performance among all players on the field as he made two(2) clearances of which one(1) was on a line, blocked three(3) shots, two(2) interceptions, two(2) tackles, fouled twice(2), and accurate passes of 76%.

Stats: Roma had a very tough game against Udinese and won on a low margin. Gianluca who plays for Roma had a very splendid performance as he made two(2) clearances of which one(1) was on a line, blocked a shot, two(2) tackles, and a pass accuracy of 96%.

Stats: Ruiz showed an excellent display against Napoli as he scored one(1), made two(2) shots, four(4) tackles, a clearance, 102 touches, and accurate passes of 94%.

Stats: After a failed spell at Chelsea, Zappacosta has regained fitness and doing well for his current team Atlanta. Against Sassuolo he made an only shot which resulted in a goal, also created two(2) chances, three(3) key passes, had 58 touches, and 88% accurate passes made.

Stats: Inter Milan won against Fiorentina by 3-1 and Calhanoglu played an instrumental role. He made an assist, created a chance, made two(2) clearances, a tackle, and successful passes of 92%.

Stats: He was the most rated player on the field against Sampdoria as he made two(2) assists, two(2) shots, 49 touches, 90% accurate passes, five(5) key passes, an interception, and created three(3) big chances.

Stats: Legendary Striker was on fire despite his age against Salernitana as he scored all two goals which resulted in a draw. He had two(2) shots on target, made 25 touches, a key pass, 100% accurate passes, and was fouled twice(2).

Stats: Juventus nearly had a draw against Spezia but won 3-2. Chiesa did contribute one goal, made eighth(8) solid key passes, six(6) tackles, a clearance, 66 touches, four(4) shots, and accurate passes of 80%. 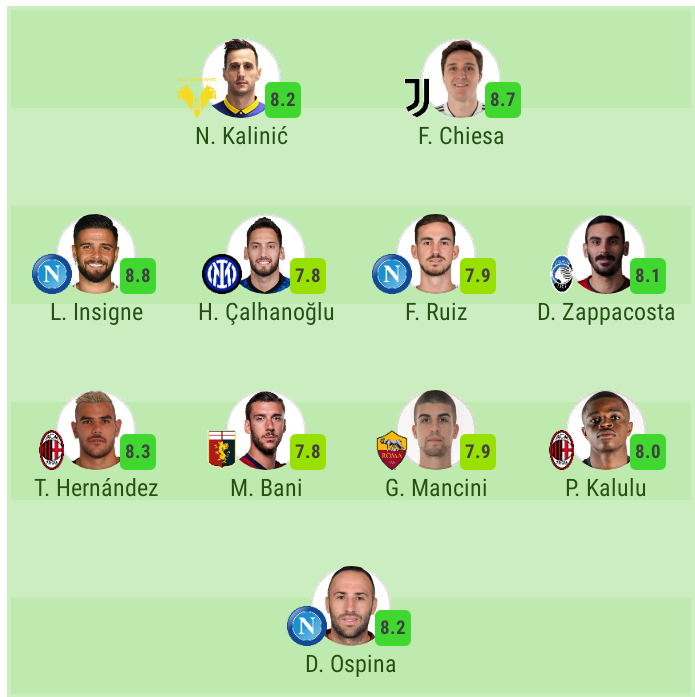