These are the top Eleven(11) rated players in the English Premier League this week according to statistics on sofa score.

Alison was very solid in a goal post against Southampton with 3 saves coming from the box and 2 punches which were enough for a clean sheet and a rating of 8.2.

Despite losing to Aston Villa at home, Guehi did a solid job at the back with a goal, which is his second goal this season and in a row.

Guehi Stats after the game:

2 tackles, an interception, 2 shots in total which led one to a goal, a clearance, and 96.3% accurate passes.

Coach Jurgen Klopp and his boys are not backing down on the title this season as they kept a clean sheet at home against Southampton in a 4-0 win of which the Dutch scored one.

van Dijk Stats after the game:

Johnny Evans Came in hard against Watford with an assist which is enough to be In the team of the week.

Arsenal did a job on Newcastle at home with 2-0 and Takehiro was outstanding with a rating of 8.6 more than any player on the field.

Takehiro Stats after the game:

This is the best performance from the Japanese after 10 games.

Captain Gundogan and his boys showed classy performance as they won by 2-1 at home and a rating of 8.3.

Gundogan Stats after the game:

A classic performance from the German.

Aston Villa are back on winning ways after 5 games without a win to record 2 wins in a row.

McGinn was very brilliant this weekend as he add the last goal in a 2-1 win at away against Crystal Palace today.

McGinn Stats after the game:

Tariq played in a much-attacking role than his usual role as a right-wing-back this week against Leeds United which he did well in a draw.

Tariq's Stats after the game:

The Portuguese is one of the three Liverpool players featured in this week's Team of the week because of their outstanding performance this week.

Jota Stats after the game:

Vardy showed a master class performance with 2 goals against Watford in 4-2 at home which now puts them in the mid position on the league table.

Vardy's Stats after the game:

After a long absence of football, James Maddison is back with an impressive performance with a rating of 9.3 against Watford in a 4-2 win at home.

Maddison Stats after the game: 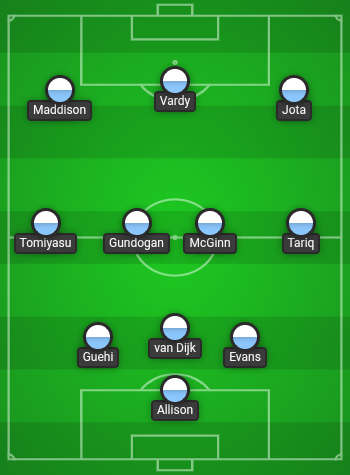