It was a day of mixed reaction as the matches in the ongoing Ghana Premier League continued on Sunday.

Leaders Asante Kotoko were held to a draw at home, denying them an opportunity to extend their lead at the top of the stairs to 12 points.

Earlier on Saturday, second placed Bechem United drew 1-1 with Accra Hearts of Oak, and, the result presented Asante Kotoko an opportunity to increase their lead on top of the table to move closer to winning the title.

However, Kotoko were held to a 1-1 draw at home to Aduana FC at the Baba Yara Stadium in Kumasi as the points were shared. 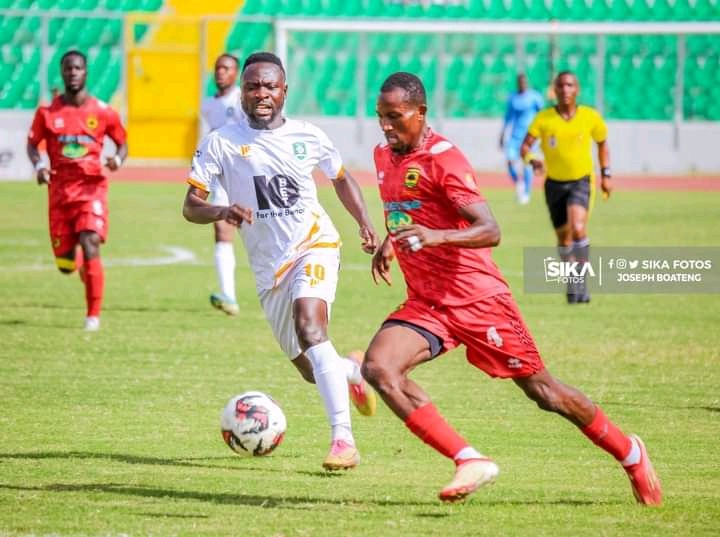 With six matches to end the campaign, the Porcupines still remain favourites to win the diadem despite failing to win this afternoon.

Gold Stars increased their chances of survival with an important 2-1 home win over King Faisal Babes at the DUNS Park in Bibiani.

Defeat, leaves Faisal in danger of being relegated despite starting this campaign on a promising note.

Medeama SC scored a clean 2-0 home win over AshantiGold SC at the Akoon Community Park in Tarkwa where they have been impressive at this season.

They are third on the table as they seek to finish in the top-four at the end of the season.

Eleven Wonders boosted their hopes of avoiding the drop with an important 2-1 home win over Karela United at the Ohene Ameyaw Park, Techiman in a game they dominated.

Dreams FC and Real Tamale United, RTU played out a pulsating 2-2 draw game at the Dawu Park on the Akwapem Ridge as both sides look to stay in the competition for next season.

The same result was produced at the Nduom Sports Stadium where Elmina Sharks encountered WAFA at home.

On Friday, Great Olympics beat Berekum Chelsea 2-0 at the Accra Sports Stadium for their first win in four matches.

The last of the Matchday 28 matches will be played on Monday when Accra Lions hosts Legon Cities at the Accra Sports Stadium in a capital derby.

Inkai Williams And Salisu Mohammed Get Better Ratings Ahead Of Dede, Jordan, Gyan And Kamaldeen

The Best Starting Eleven That Coach Otto Addo Should Have Used Against Brazil, Afena, Wollacott Drop