By KkCabobo (self media writer) | 7 months ago 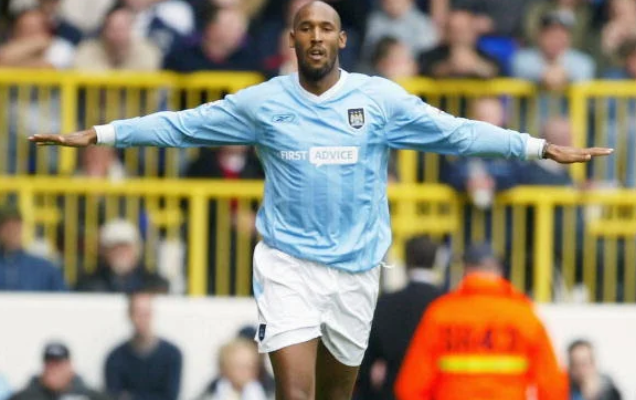 Both the clubs have had most of their success in recent times following the arrival of a billionaire Arab owner. Both have dominated their leagues in recent years and have only the Champions League crown to add to their impressive trophy cabinet.

Toure was fresh from a French League double with Nantes when he moved to Manchester City in 2001. The attacking midfielder made just two appearances for the Citizens. An injury early into the campaign ruled the Frenchman out for the season.

The attacking midfielder moved to Paris Saint-Germain after just one season with Manchester City. The situation wasn’t much better in Paris either. He rarely started for the Parisiens. Toure, though, did play the final few minutes during PSG’s victory over Chateauroux in the 2004 Coupe de France final. Toure spent just two seasons with PSG, making 35 appearances and scoring one goal.

Alioune Toure went on to play in Portugal, UAE, Cyprus before returning to France and retiring in 2010 after a brief stint with Paris FC.

The Algerian was the reigning French Division 1 Player of the Year winner when he joined Paris Saint-Germain in 1999. The midfielder was a well-known figure in the French football circuit after helping AS Monaco and Bordeaux to league titles in 1997 and 1998.

On his arrival, Benarbia was made the captain of the young PSG team. The Algerian led PSG to a second-place finish in the French League, finishing seven points behind winners AS Monaco.

After a dismal season, Ali Benarbia left Paris a year later to become a Manchester City player. In his two seasons, the Algerian made 67 appearances but managed just two goals. The midfielder, though, won the UEFA Intertoto Cup with PSG before completing his free transfer to Manchester City in 2001- becoming one of the five players in this list to play for both clubs.

The Algerian arrived at Maine Road following the Citizens’ relegation from the Premier League in 2001. Benarbia was an instant hit in Manchester as he mesmerized the crowd, quickly becoming a fan-favourite.

Despite having his prime years behind him, Benarbia helped Manchester City win the First Division and earn a route back to the Premier League. The Algerian’s impressive display earned him a place in the 2001 PFA First Division Team of the Year.

With his best days behind him, Benarbia struggled to cope with the pace and physicality of the Premier League. The Algerian spent just one more season at City before leaving the club in 2003.

Benarbia played his final game in Manchester City colours against Barcelona in a game that marked the opening of the new Manchester City Stadium. In his two seasons at Manchester, the Algerian made 77 appearances and scored 11 goals while also winning the 2002 Manchester City Player of the Year award.

The Frenchman made his name in the lower leagues before joining Paris Saint Germain in 2000. Distin caught the eye of the Parisiens during FC Gueugnon surprising 2000 Coupe de La Ligue triumph.

The defender quickly established himself as a regular in the starting lineup. The Frenchman was an ever-present figure during PSG’s Champions League fixtures. Distin, though, spent just one season at the Parc des Princes.

In his short span in Paris, the Frenchman made 45 appearances but failed to win any silverware. Distin’s impressive displays, though, caught the eye of Newcastle United, and the Magpies brought the Frenchman on loan to the Premier League the following season.

Sylvain Distin became one of the Manchester City players in 2002 as their most expensive defender. The defender had an impressive spell on loan at Newcastle but decided to move to Manchester.

The Frenchman had an impressive debut spell, winning the 2002-03 Manchester City Player of the Season award. Distin went onto spend four more seasons at Manchester before moving to Portsmouth.

During the five seasons, Distin made 206 appearances and scored six goals. He also captained the Citizens for three seasons. The Frenchman played ten more seasons in the Premier League before retiring in 2016.

The Ballon d’Or winner established himself as a household name during his time with Paris Saint-Germain. Weah moved to the French capital in 1992 after an impressive spell with AS Monaco. The Liberian had an instant impact on the PSG. The Parisians came agonisingly close to winning the League, only to lose out of Marseille, who later lost it due to the bribery scandal.

PSG, though, made amends for their miss and went on to win the League the following season. The year 1995 was a special one for George Weah. The striker became the first African to win the Ballon d’Or and completed a dream move to AC Milan.

Weah had a very brief stint in the Premier League with Manchester City. The striker was past his prime when he moved to Maine Road in 2000. The Liberian played just 11 games for the Citizens and left the club two months into his contract. A lack of starts frustrated Weah and caused him to move from the in October. The striker went onto have spells at Marseille and Al Jazira before retiring in 2003 having been one of few players to play for both Manchester City and PSG.

Perhaps the most recent name in this list, Anelka, graduated from the Paris Saint Germain youth academy. The striker made his debut in 1996 at the age of 16. The striker’s talent caught the eye of Arsene Wenger, and he moved to Arsenal in 1999.

The striker returned to PSG four years later after a stint with Spanish giants Real Madrid. On his return, PSG started brightly under the captaincy of Anelka. But the second half of the season saw PSG having a drop in form and eventually finishing ninth in the league.

Anelka, though, won the 2001 UEFA Intertoto Cup with PSG before moving to Liverpool on loan in 2001. In his two spells at the Parc des Princes, Anelka made 68 appearances and scored 19 goals.

Anelka had a decent spell at Merseyside and returned to the Premier League the following season, joining Manchester City in 2002. The Frenchman had a decent start to life at Manchester, becoming the club’s top scorer in his first two seasons.

Anelka left the club midway into the 2004-05 season to join Turkish giants Fenerbahce. In his two and half seasons, Anelka made 103 appearances and scored 45 times.

Nicolas Anelka went on to play for Bolton, Chelsea, Shanghai Shenhua, Juventus, West Brom and Mumbai City before retiring in 2015. He remains one of few players to play for both Manchester City and PSG.