By Frankveli (self meida writer) | 23 days 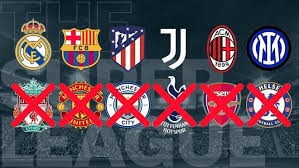 The Super League appeared to be nothing more than a fever dream after Premier League clubs Chelsea, Manchester City, Tottenham, Arsenal, Manchester United and Liverpool all announced their withdrawal from the proposed European Super League.The abrupt withdrawal comes after fans protested the proposal for the Super League. Quite a few fans had gathered outside stadiums in England to stage protests against the club owners' decisions.

The UEFA president Aleksander Ceferin welcomed the reversal, adding: "They are back in the fold now and I know they have a lot to offer not just to our competitions but to the whole of the European game.The important thing now is that we move on, rebuild the unity that the game enjoyed before this and move forward together."