Why Thiago Alcantara cannot be written off yet

By KickBALL (self meida writer) | 10 days 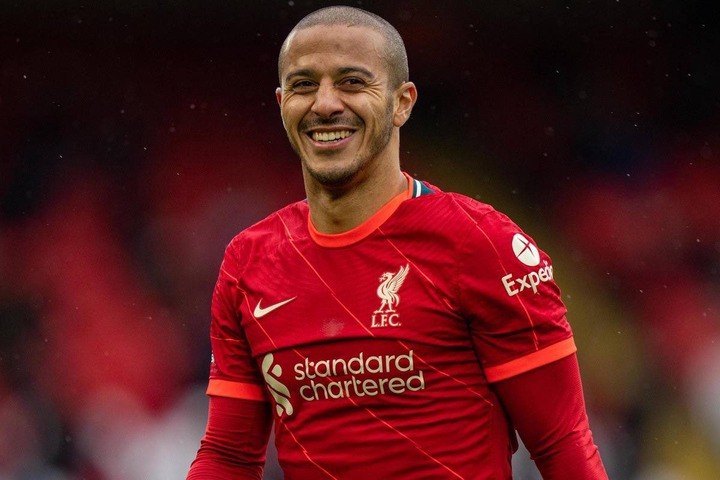 Thiago Alcantara produced an exceptional performance to help Liverpool climb third on the Premier League, level with Manchester United and Chelsea on 10 points and eight goals after a scintillating 3-0 win against Leeds United.

Mohamed Salah opened the scores in the first half before Fabinho grabbed the Reds second. The Spaniard earned his first Premier League start in the new season dominating the midfield and unselfishly set up Mane for the Reds third goal.

The 29-year old completed 38 passes in the opposition half, most in a single match according to Skysports. There was 10 times possession won, most in match 4 tackles and 1 assist today. The Spaniard’s lack of playing time at Anfield in the current season speculated that the Reds were willing to part ways with their midfielder for Franck Kessie in what could be a swap deal, Il Milanista reported.

Despite Thiago’s solo goal last season in 30 matches when he joined the Reds, Jurgen Klopp is confident that he will be much needed in the new campaign, having slammed public perception about the former Bayern Munich star last season.

“He came in late, which is just the nature of some transfers, then he got Covid, got injured, and still had to adapt to a new team – and a team which was not exactly flying with no problems at all,” Klopp told Sky Sports in February.

With the Champions League resuming this week, and Harvey Elliot likely to be off for few weeks, a rotational system could be employed by Jurgen Klopp to manage his squad to avoid similar complications just like last season and Thiago Alcantara's brilliance will be needed to push the Reds ahead.

Thiago’s work was done when Jurgen Klopp used his last sub to send on Naby Keita in the 93-minute.

Liverpool will play AC Milan On Wednesday in the Champions League before hosting Crystal Palace on Saturday at Anfield in the Premier League game.