Alisson received two red cards for Brazil against Ecuador but VAR overturned them both. 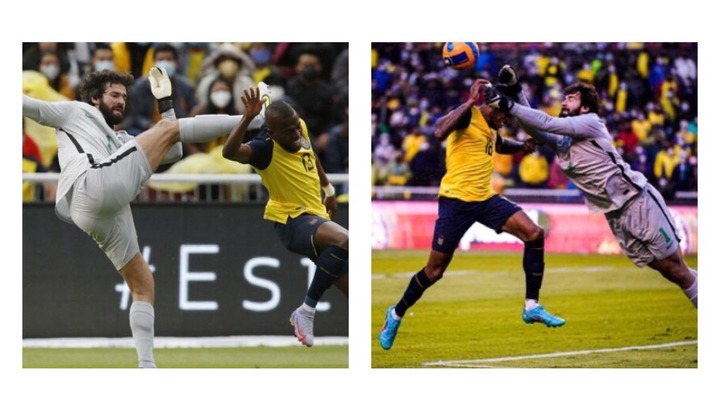 After an entertaining 1-1 draw in Quito, where an early Casemiro goal was cancelled out by a magnificent Félix Torres header, Tite is still on pace to become the first manager to complete qualifying unbeaten.

Both Alexander Domnguez and Alisson's flying kicks resulted in red cards, albeit Alisson's was rescinded not once, but twice in a chaotic game. 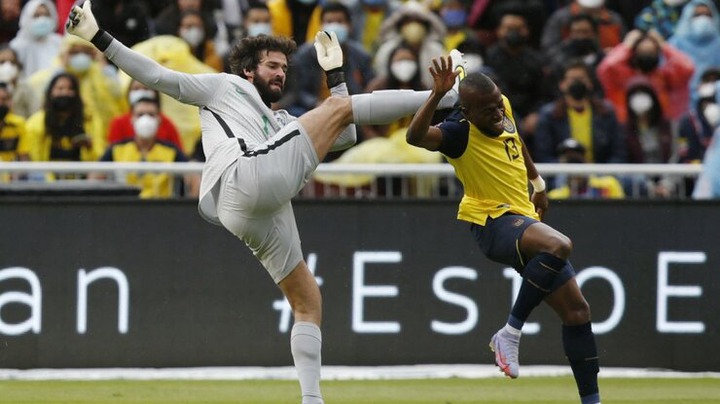 You'd think that with two sides sitting atop the qualification group standings, this would be a rather low-key affair.

With Spurs right-back Emerson Royal receiving a rash yellow card in the first minute, it was evident this would be anything but.

With the goal at his mercy, former West Ham striker Enner Valencia headed wide of Alisson's left-hand post from the subsequent free-kick.

After some poor goalkeeping from Alexander Domnguez, who failed to punch clear before Casemiro managed to tuck the ball home from close range, Brazil took the lead. 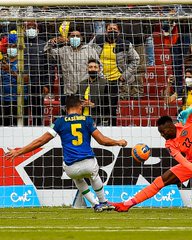 What happened next is something you'll never see in a football match again.

Domnguez impaled Matheus Cunha with a crazy high-footed challenge after his earlier hit, leaving his opponent gushing from the neck.

Referee Wilmar Roldan used VAR to affirm the red card, but thankfully it resulted in a free kick rather than a penalty, which was blazed over by the recalled Philippe Coutinho.

In the following phase of play, Emerson was given a second yellow card for kicking out at Michael Estrada, before Liverpool goalkeeper Alisson was sent out for another high-footed foul on Domnguez.

Valencia attempted to make the most of some amateur dramatics, so Roldan consulted VAR once more, but this time he found the challenge merely worthy of a yellow.

'La Tri' had the ball in the net just after half-time when Estrada pounced on an Alisson error, only for the linesman to rule the ball had gone out of play during the build-up.

VAR was used to upset Ecuador again minutes later, this time overturning a minor penalty for a Raphinha challenge on Pervis Estupián.

Torres rose highest to meet a corner from the right and nod home 10 minutes from time, proving that the bombardment had paid off.

Despite another penalty being overruled by VAR, Brazil was able to extend their unbeaten streak in World Cup Qualifiers to 30 games, and they continue to be a fearsome defensive force, conceding only five goals in 14 games.

Watch highlights of match below.