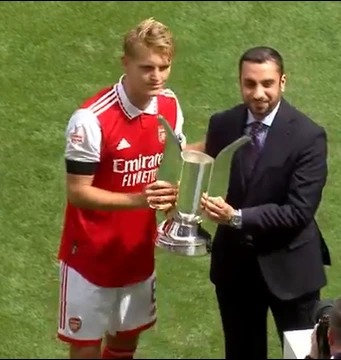 Arsenal beat Sevilla 6-0 at the Emirates stadium earlier today to win their second preseason trophy, the Emirates cup. With an excellent first-half display that saw them dominate every aspect of the game and limit Sevilla to just half-chances, Arsenal also created plenty of chances of their own, with nearly twice as many chances missed than converted.

The goal-scoring party started when Bukayo Saka converted a penalty he won after a foul by Sevilla defender, as Gabriel Jesus scored a brace in 2 minutes just two minutes after Saka's goal before Saka added a 4th to take the score to 4-0 at halftime. Until they chose to go for it again and got it through Gabriel Jesus (completing his hat-trick) and the sixth from Eddie Nketiah, Arsenal played a more sophisticated and dominant game in the second half

Since Mikel Arteta's appointment, Arsenal have gone a long way, and this result demonstrates just how far they can go this season if they keep together. Their next adventure would be to secure a place in the champions league next season when they open the premier league for the 2022/2023 season with their game against Crystal Palace.