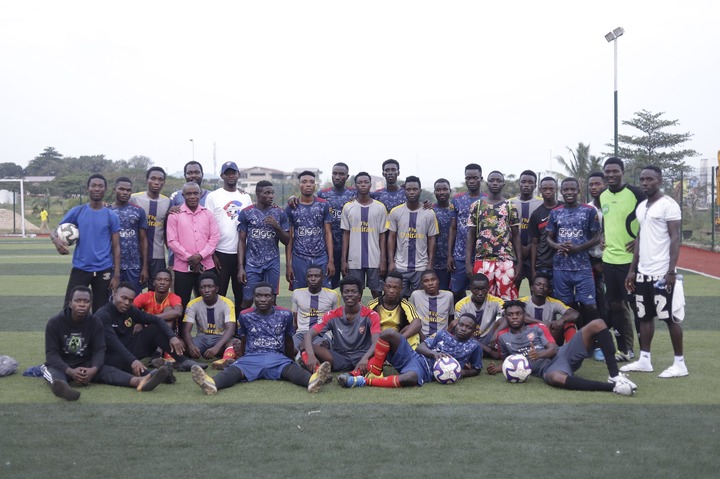 From the streets of Lapaz-new market, a young club was born in 2000.

Through the many years of struggles, Richard Kabutey was able to register Leeds United for the Greater Accra Regional Juvenile/Colts League In 2001.

As passionate for football as he is, he spent the little he had in securing jerseys, football boots, other equipment and most importantly paying referee fees for the club.

What inspired the young CEO into forming the club which many youth will actually not give a try?

In over two decades, Leeds United which has metamorphosed into De-Gunners, boasts of over 150 playing body made up of juniors and seniors.

De-Gunners compete in the Greater Accra North in the U10,U13, U15, U17 for the juniors and the Division 3 for the seniors under the Ghana Football Association.

Richard Kabutey from the onset was a man of many tasks, serving as the coach, team manager, Secretary and did the laundry.

His works attracted another young man, Frederick Anani Yormedah who has interest in juvenile football.

The hardwork of these two young men cannot be underestimated as they have produced quality professional players who have gone on to play for the senior national team of Ghana, the Black Stars.

2009 FIFA U-20 World Cup winner, Daniel Adjei, former Hearts of Oak and 2011 All Africa Games Gold medalist, Gilbert Fiamenyo all passed through the mill at De-Gunners.

Other players like former Aduana Stars and Asante Kotoko midfielder Seth Opare were grilled at the De-Gunners.

Currently there are a crop of young products from De-Gunners who are lighting up Ghana’s and other country’s second tier leagues.

On the local front, Stephen Kofi is grinding in goals for Kotoku Royals, striker Wilberforce Awuah is a key member of Nania FC, Francis Kumah is with Accra FC, Mohammed Karim who last played Professional football with Istanbulspor of Turkey tasted club games with Vision FC while Samuel Pimpong enjoyed his time at Dreams FC and briefly at BEREKUM Chelsea.

De-Gunners FC are currently developing a facility at teacher Mante in NSAWAM and it is aimed at developing young talents in, around and beyond its location.

Upon completion, the facility will include club secretariat, standard football field, a six aside field, swimming pool,changing rooms for both teams, gymnasium, clinic, club store, conference room and a hostel.

In the process of constructing a befitting edifice for a better football system, fortunes have been pumped into the project.

Existing project cost include a

*Borehole which will serve as a means to provide water went for - 7,000GHC

Plans are in advance to complete the project in no time to kick start a dream nurtured 20-years ago.

You Can Deceive Us But Not Allah; This Is What An Imam Was Caught Doing During Ramadan

Headaches Can Be Intense Without The Right Medication; Use These Natural Remedies To Feel Relieved

Causes Of Involuntary and Uncontrollable Shaking Of The Hands and Fingers