By Pristinenewsonline (self media writer) | 4 months ago

The semi-finals of the Carabao cup between Chelsea and their London rivals, Tottenham Hotspurs was an end-to-end thriller. Not only that but also, it was enthralling, scintillating and captivating.

The first leg at Stamford Bridge was enchanting. Chelsea decimated their London rivals by two goals to zero. Kai Havertz scored the first and then an own-goal by Ben Davies. 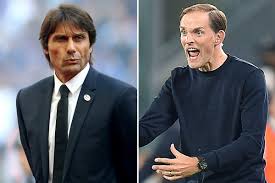 The tactical variations in the match were unparalleled. Two of the best coaches in the world at the moment, Thomas Tuchel and Antonio Conte, brought out their impeccable tactical nous, with the former trumping his authority on the latter emphasizing why he was the best male coach of the year in 2021. The novel formation of 4-4-2 by Tuchel under his spell at Chelsea made them unstoppable against Tottenham Hotspurs.

Chelsea's management as well as fans seem to brushed away for good the Romelu Lukaku's brouhaha. This has given Thomas Tuchel the utmost respect and unspeakable support of Chelsea fans.

In the second leg at White Hart Lane, Thomas Tuchel played a formation of 3-4-2-1 which subsequently became 4-2-2-2. It equally was end-to-end thriller. The in-game management of Thomas Tuchel was phenomenal and this made Chelsea striking victors. Chelsea won again by a goal to nil. The live wire of the game, Antonio Rüdiger sealed the break with his striking goal. This means Chelsea has beaten Tottenham Hotspurs home and away with an aggregate of ( 3 - 0 ) and heads to the final at Wembley Stadium.