Clubs With The Highest Unbeaten Run In The Champions League

The UEFA Champions League (UCL)is one of the most prestigious club completion in the world. People from all over the world watch this competition. It competes with the FIFA world cup as the most watched competition in the world. Due to how lucrative it is, every club in Europe dreams of playing in it. Real Madrid of Spain are the highest winners of the competition, they have won it thirteen (13) times. AC Milan of Italy has won seven (7) times while FC Liverpool of England and FC Bayern Munich of Germany have both won it six (6) times. FC Bayern Munich was the last to win the competition last season after beating Paris Saint Germain by a lone goal in Lisbon.

Records are part of football and it calls for the bragging rights of clubs. In thee champions League, only Real Madrid has won and defended it thrice. Only three clubs boasts of the highest unbeaten run in the Champions League; Manchester United, FC Bayern and AFC Ajax. These clubs are elites of the competition and are all previous winners of the competition. But for FC Bayern, both Ajax and Manchester United have been eliminated from this year's UCL.

Manchester United boasts of the longest unbeaten run in the UCL at 25 games. This spans from 2007 to 2009. They won the competition in between this years in 2008.

FC Bayern Múnchen equalled their previous unbeaten run after winning against SS Lazio yesterday. They hold a joint unbeaten run of 19 games. They are still in the competition and also one of the favourites to win it. Let's see what happens with them. Their first stint was from 2011 to 2012. 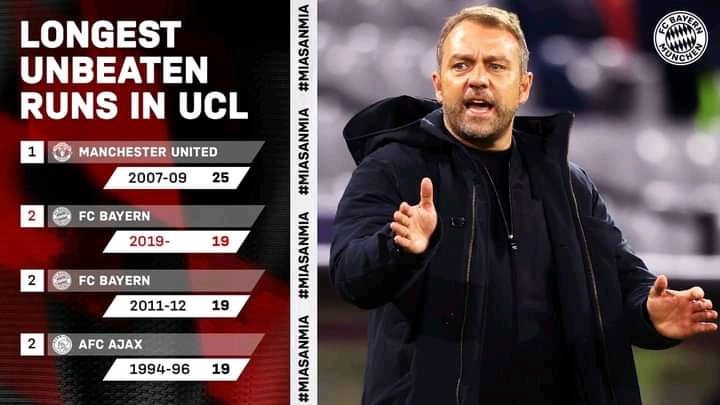