The Ballad of Bobby Firmino 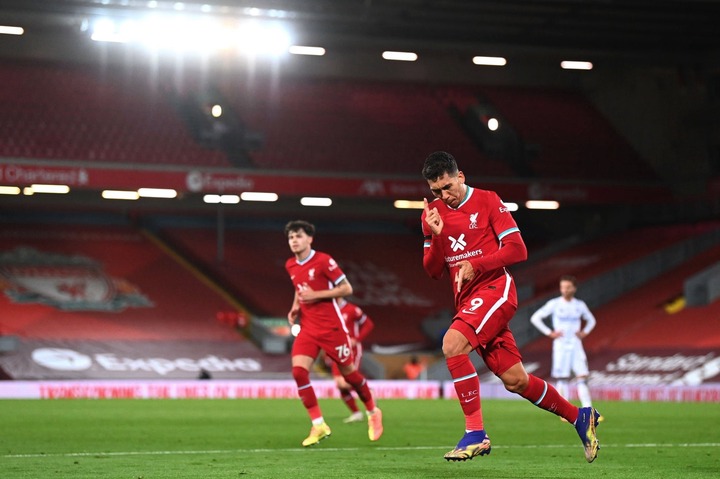 It seemed like it would never happen. I’ll admit it. Even I started to believe that something was wrong. Sure, I’m sending out bi-weekly emails that can be distilled down into the process matters more than the results. It sure felt like Roberto Firmino had perfected the art of not scoring goals.

First there was this one, a perfect set-play routine watch Firmino slip in toward the back post that led to a full-on karate kick toward an open goal with not a defender in sight that he just completely.

Then a double-hit of misses from two yards away: one a near-post flick without much room to score, the other an open, point-blank header smacked directly into the post. If he just closes his eyes and hopes for the best, the ball probably banks off his noggin’ differently and ends up in the net

And it kept getting worse, too a progressively bleaker comedy of errors amidst a team-wide triumph. First, Firmino turns past Wesly Fofana beautifully, then rips the ball directly into the post, and then it bounces directly toward him, goal agape, and, well, somehow this moment in time did not end up increasing the scoreline to 3-0:

Nine minutes later, though, the unthinkable happened. Roberto Firmino used a body part other than his hand (or whatever else is also being defined as a hand nowadays), made contact with a soccer ball, and directed it between the three perpendicular metal pipes of which the modern goal frame consists:

Take a look at his shot-map for the game (per Stats Perform), with the chances each scaled by size based on the expected-goal value of the individual attempt.

All of those big red dots each worth at least 0.2 xG -- and yet the one he scores with is the header, in traffic, from the penalty spot, which historically has been converted just about five percent of the time (0.05 xG). As I’ve tried telling you: this sport is incredibly dumb! Wanna say Firmino is a bad finisher. well oh my word, how did he score on the hardest attempt of the match? I want to say Firmino is a great attacker. He only score one goal on six shots worth 2.02 xG. The lesson, of course, is the “finishing skill” is a slippery eel that you’re gonna struggle to get a grasp on.

According to Stats Perform’s xG database, which goes back to 2008, there have been 35 individual Premier League games in which a player generated at least 2.0 open-play xG -- and 33 of them got on the end of an even better collection of chances than Firmino did on Sunday. The most xG in a single match was Alexandre Lacazette’s 2.97 for Arsenal against Manchester United in December 2017. United won the game, 3-1, despite being outshot 33 to 8. Lacazette produced what might’ve been an all-time-great striker performance on another day, and it got snuffed out by the best 90 minutes of goalkeeping I’ve ever seen.

Among the 35 members of the 2.0 club, Manchester United’s Dimitar Berbatov made the most of his chances, scoring five goals on 2.53 xG in a December 2010 match against Blackburn Rovers, while Chelsea’s Tammy Abraham did the least: zero goals on 2.19 xG in Chelsea’s 2-1 win over Manchester City back in June. But Firmino is closer to the mean than either of those two. Of the 35 individual games with at least 2.00 xG, the average number of actual goals scored is only 1.89. When a Premier League player packages together a collection of great chances in a single game, underperformance has been the norm.

Now, through nine Premier League games, Firmino has scored two goals on shots worth 3.95 xG. Last season, it was just nine goals on 13.95 xG. And the year before that, it was 12 goals on 13.55 xG. Guy can’t shoot! Well, maybe. Take the entirety of his Liverpool career, and Firmino is actually ever-so-slightly ahead of his expected pace: 59 goals on 57.25 xG. Like most players, Firmino is most likely just a roughly average finisher. Even if it didn’t seem like it on Sunday, the odds of him converting a given chance are the same as pretty much anyone else.

The best baseball players get a hit, say, one out of every three at-bats. And the best baseball players go through slumps every season, but the averages typically smooth out by the end of the year. However, Mike Trout, the Lionel Messi of baseball, had 600 at-bats during the last full MLB season. Firmino has only taken 347 shots, total, since joining Liverpool in the summer of 2014. Meanwhile, the hottest finishing seasons typically see a player score about two in every 10 shots. It’s no surprise, then, that players will experience wild finishing swings from season to season, game to game, or even minute to minute.

With the chances from Sunday, Firmino has the fourth-most open-play xG in the league behind Dominic Calvert-Lewin, Patrick Bamford, Harry Kane, and Sadio Mane. If he keeps playing like he’s been playing, he’s gonna start scoring goals. Just look at what happened in the 86th minute on Sunday.

Check Out What This Couple Were Doing That Got Users Talking.

NAGRAT President Discloses The Salary Of Headmasters Of Achimota, PRESEC, Others

Video: See What This Lady Was Trying To Do That Got people Talking.