Messi mocked after Argentina loses to Saudi Arabia by 2:1 in an incredible World Cup shock

By kerty (self media writer) | 2 months ago

Following Argentina's shocking loss to Saudi Arabia by 2 goals to 1, Lionel Messi has received jeers for his status as the alleged GOAT of football.

The Albiceleste, who was widely expected to win the tournament in Qatar, were defeated 2-1 by a Middle Eastern opponent in their opening match of the 2022 finals.

Messi had put Lionel Scaloni's team up from the penalty spot, but Argentina disintegrated in the second half to suffer a devastating defeat after having three more attempts disallowed for offside. 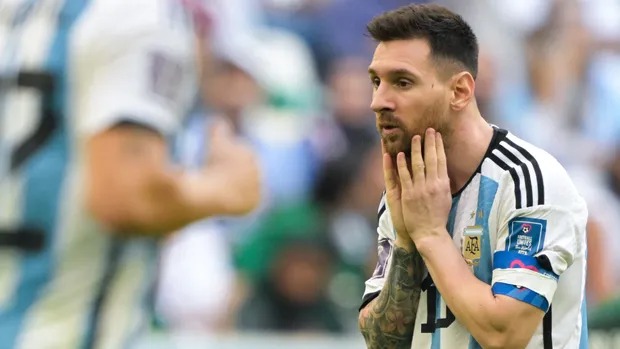 Unsurprisingly, afterward, fans from afar flooded social media with comments speculating as to whether a seven-time Ballon d'Or winner will ever obtain a coveted prize and solidify his position at the top of an all-time list of the finest players to have ever laced on a pair of boots.

Argentina lost in the World Cup opener for the first time since 1990 when they did advance to the final, and now difficult questions are being raised about the South Americans and their stalwart captain.

There was no question that Messi would score when he stepped up to the spot against Saudi Arabia since he looked sharp in the opening exchanges.

However, as his impact diminished, Argentina began to lack an attacking spark despite having players like Angel Di Maria and Lautaro Martinez on their roster.

On Saturday, Argentina will return to action when they take on Mexico. Argentina has one more Group C match against Poland before they enter the must-win zone.

Content created and supplied by: kerty (via Opera News )