Chelsea have seen a major soar since Tuchel’s arrival as he has also tasked Mendy, Kepa and Caballero to be in top forms 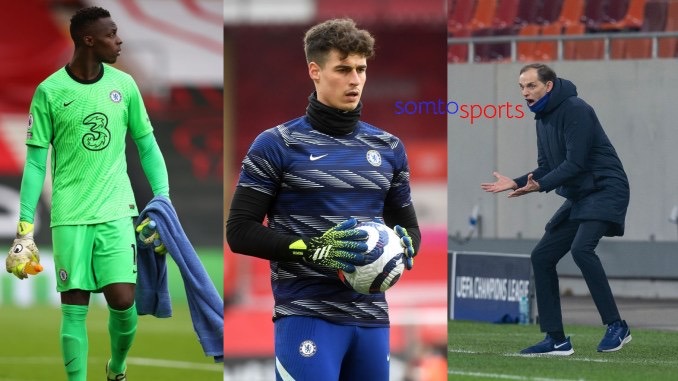 Edouard Mendy despite having been scared at first following the switch in power seems to have regained confidence under the new manager.

The former Rennes mas saw his place at the club under threat when Kepa Arrizabalaga was fielded twice in a row in quest for his return to form.

Of which the Thomas Tuchel afterwards came on clarify that the first choice goalkeeper still has his place intact.

Mendy was in between the sticks during their 1-0 victory against Atletico Madrid with the Spanish side failing to record a single shot on target.

Tuchel had clearly stated that he needs all three keepers fully fit and not just a number one keeper.

Speaking in reaction to the fight for first choice place by Kepa and Mendy, the Senegalese said; ‘I fight with Kepa but with Willy as well.

The coach has said that he needs three strong goalkeepers.

‘We need to be ready and we have to show it to start on the pitch,‘ he added.

Chelsea have suddenly gone from a weak side to a very strong side since Tuchel promised to make the West Londoners a side every team will reject battling with.

Edouard Mendy as well has confirmed how Tuchel has made the team strong from the inside as he detailed the wins are greatly increasing their confidence as a team.

‘The coach gives confidence to all the players. We know what he wants so when we are on the pitch we have to show why he has chosen us,’ Mendy said.

‘It’s very positive for all the players because he gives us a lot of confidence and we need to improve and to play great football when we are on the pitch.

‘He is very expressive. He shows when he likes something. When you did well on the pitch and every day at training and in the game he pushes you.

‘He stays positive but he also shows his determination and that is good for me and the team.’

Chelsea will face off with Manchester United on Sunday as they look likely to close points between the Red Devils to 3 points with a win at Stamford Bridge.

Despite being so confident under the new manager, Mendy didn’t fail to admit the fact that Man United on their own are another strong side likely to cause slip if care isn’t taken.

Meanwhile he still believes Chelsea can be triumphant over their strong rivals as they also eye the returning leg of their Atletico Madrid clash.

‘Manchester United is a very tough game. We remember the first game. It was very tough. This team plays very well.

‘We play at Stamford Bridge so we have to show that we want to win this game because it’s a really important game for the league.’