By SportsWeb (self media writer) | 1 year ago

Please before you continue, make sure to follow this page to be eligible to receive our every post from the very first minute and make your football knowledge unbeatable. Like and share it to others too if you think it's worth it.

The Bundesliga Golden Boot Award is an annual award given to the top goalscorer of every Bundesliga season. This award goes way back to the 50s, but we are only going to look at that of 1992-2020. Since the new era(1992), this award has been won by 28 players from different countries and continents.

Every player who has won this award obviously has a nationality, so we will start from country wins. Germany whose federation is the Bundesliga has most awards with 10. In second place is Poland who has had Lewandoski or as some say, 'Lewangoalski' to win 5 for them. Brazil with 4 awards comes in third place and have been struggling to win any in the past decade. Ghana and Bosnia each with two comes at fourth place as the Ghanaian legend Anthony Yeboah won all their two awards for them. Denmark, Slovakia, Italy, Netherlands and Gabon each with one award comes in fifth place. Up till now no Asian country has been able to win it, but we hope this can change in the upcoming seasons. 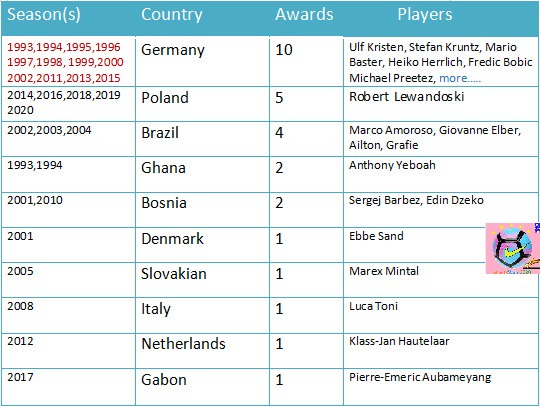 When it comes to club victories, the almighty Bayern Munich has the most with 7, in which Lewandoski won 4 of them. Bayern Leverkusen with 4 awards, 3 won by the legendary Ulf Kristen comes in second place. Frankfurt and Bourssia Dortmund each with 3 awards comes in third place in which 2 of Frankfurt's award was won by Anthony Yeboah. Werder Bremen, 1860 Munich, Schalke 04 and Wolfsburg each winning it twice are tied up at third place. Bourssian Monchengladbach, VfB Stuttgart and 5 more other clubs have won it only once which makes all of them tied up at fourth place.

Some players found it easy to win their award as some struggle to do so. Ever since 2003, winning the award with less than 20 goals wasn't a thing, however Alexander Meier from Frankfurt used 19 goals to win it in 2015. The record for most goals used to win the award was held by Aubameyang with his 31 goals at Bourssia Dortmund. This record lasted for 3 seasons before it was broke by Robert Lewandoski with 34 goals in 2020. Ulf Kristen is the second player with most awards with 3 won in the late 90s. Africans don't win much European awards but Anthony Yeboah from Ghana became the first African player to win it and was joined by Aubameyang from Gabon in 2017.

This award has been won by many great players and it doesn't look like it is going to stop. Erling Haland who is set to win this award could become the youngest player to do so but Lewandoski isn't making it any easier for him as he also is set to win another one and add it to his collections. Below is the full list of winners of this award since 1992, enjoy.

This brings us to the end of this article. We have another one coming up called Bundesliga winners since 1992 so just take a second of your time and click on follow to receive from the first minute. If you liked this post, show your appreciation by sharing this post with others through all social media platforms. Thank you and stay SAFE!! 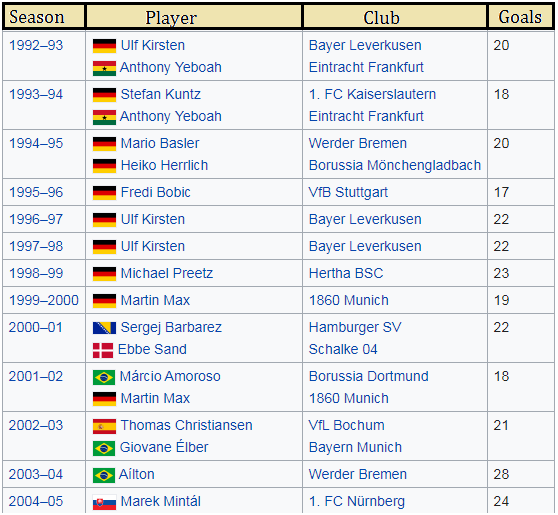 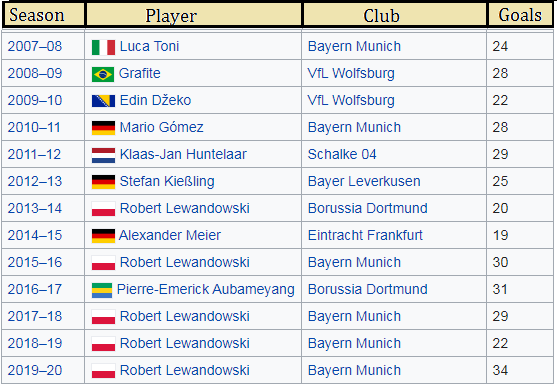