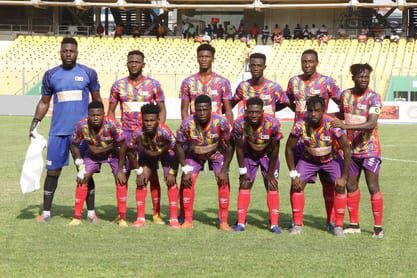 The Phobians will embark on the departure to Algeria on Wednesday.

The match is meant to be played on Sunday, December 5 and will be played at the 20,000 capacity 20 August 1955 Stadium in Bechar in Algeria.

Hearts have the upper hand in the play-offs tie after a 2-0 win in the first leg in Accra last Sunday with goals from two non - strikers Ibrahim Salifu and Agyenim Boateng respectively.

Boadu’s side Accra Hearts of oak are hoping for a positive outcome in Algeria to propel them for the group stage of the competition for the first time in over a decade.

The last time Hearts travelled to north Africa they suffered a humiliating 6-1 against Wydad Casablanca popularly known as WAC to crash out of the Confideration of African Football CAF Champions League.

“Going into the return game, I have learnt a lot from the WAC of Morocco game, so tactically we need to strategies very well for the second leg encounter with the host JS Saoura. We would do our ultimate best to qualify to the group stages,” the teams coach Samuel Boadu stated following Sunday’s game.

“I plead with the entire Hearts fans to remain calm and this is the time we need their support. They should encourage the boys when things go wrong and at the appropriate time,” he said.

Hearts of Oak squad: below are the squad chosen by the formidable coach Samuel Boadu for the second leg encounter in Algeria.

What are your comments as the Phobians leave for the second leg encounter in Algeria.

Will history repeat itself or the rainbow boy will redeem their image?