By Firstdaynews (self meida writer) | 22 days

The first FA Cup semi-final clash of the weekend is a blockbuster showdown between Premier League heavyweights Chelsea and Manchester City. Only Arsenal (7) have won the competition more times than Chelsea (6) since the turn of the century and they'll hope to go one better this year having lost to the Gunners in last year's final.

However, they'll need to navigate City, who themselves are in search of the quadruple. Ahead of this huge clash, we provide all the necessary pre-match information, including what time the game kicks off, where to watch the semi-final, team news and probable XIs.

When is kick off?

Where is the match?

What channel is it on?

Route to the Semi-final

Chelsea have faced a relatively straightforward route to the FA Cup semi-final, with Premier League footers Sheffield United their highest ranked opponents in that run. The Blues kicked off their campaign with a routine 4-0 win over Morecambe back in January. Timo Werner scored one of his two goals in 2021 against the League Two side and Chelsea followed up that success with a 3-1 win over Luton.

That game is best remembered as Frank Lampard's last as head coach before being replaced by Thomas Tuchel. The German oversaw a narrow 1-0 win at Barnsley back in February and it was a 2-0 win over Sheffield United last month that set up a semi-final meeting with Manchester City.

Manchester City had a somewhat tougher route to this stage of the FA Cup. The Premier League leaders eased past Birmingham back in January, but had to come from behind to beat Cheltenham later that month. Indeed, they were facing an FA Cup upset until Phil Foden's 81st-minute equaliser, with Gabriel Jesus and Ferran Torres finishing the job.

City did well to overcome Championship high flyers Swansea in the next round, again securing a 3-1 win, and booked their place in the final four of the FA Cup with a routine victory at Everton courtesy of late goals from Ilkay Gundogan and Kevin De Bruyne.

Thomas Tuchel must make do without the driving force in his midfield with Mateo Kovacic ruled out for the Blues. Other than that, the Chelsea boss has no further injury issues ahead of this FA Cup clash. Andreas Christensen was in good form during Thiago Silva's absence, but the experienced Brazilian looks to have reclaimed his starting spot at the heart of the defence. Kepa has featured in every FA Cup game this season and is expected to deputise for Edouard Mendy between the sticks.

Aymeric Laporte was part of the Manchester City travelling squad for the 2-1 win at Borussia Dortmund on Wednesday night after missing the 2-1 defeat to Leeds and he is set to start at John Stones' expense at the back. Sergio Aguero misses the opportunity to knock his potential future employers out at the semi-final stage. Zack Steffen is likely to start in goal as the American is Pep Guardiola's designated FA Cup goalkeeper, though he may look to his number one Ederson in such a high profile game. 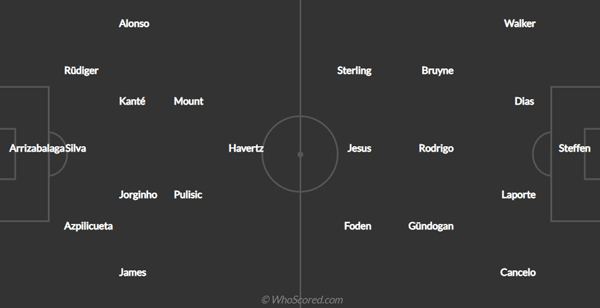 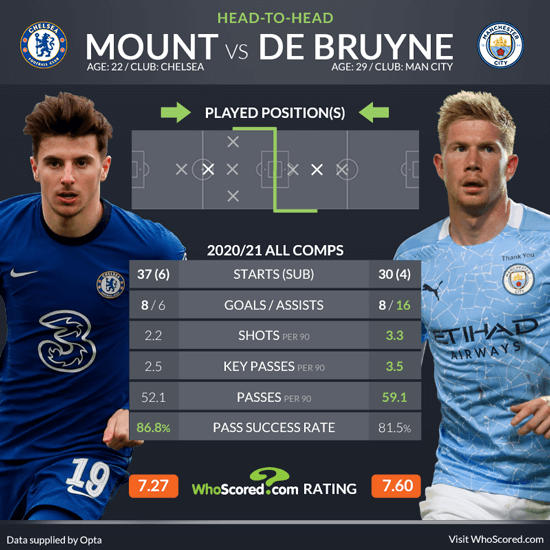 Two of the Premier League's top creators face off at Wembley this weekend as they each go in search of silverware. Mason Mount played a key role in Chelsea's progression to the semi-finals of the Champions League, netting the opener against Porto last week, however, one of his worst rated performances in a Premier League game this season came against Manchester City in the Premier League.

Kevin De Bruyne has been in superb form for Manchester City of late, scoring five times in his last six outings for Pep Guardiola's side. The Belgian bagged in the 2019 final as City romped to a 6-0 win over Watford and he'll be out to play his part in securing a second FA Cup winners' medal this time around.