A Ghana Premier League star to visit the court tomorrow

By RandyCarr (self media writer) | 8 months ago

The 31 year old Farouk Adams joined Aduana Stars from Elmina Sharks in January 2018 on a two year deal and only recently extended his contract in January 2021 for a further year. After an impressive stats for the sharks, he was been monitored by numerous clubs and Aduana Stars were the club to have won his signature. He is one of the composed and calm defenders in the centre half of the league.

His apprehension was made known to the public by the Divisional Commander of Dormaa Ahenkro police, C/Supt. Anthony Appiah in an interview with 3Sports. According to him, the incident occurred between Wamfie and Asuotiano on Monday evening, March 1.

“We had an incident, a policeman who was on duty was sent to town while he was driving in a motorbike and an unknown vehicle knocked him down and absconded. “A search was conducted but he was not found till this morning around 7:00AM when he was found between Wamfie and Asuotiano.

“He was found dead with a motorbike beside him, the body was picked and sent to the morgue. “The police tried to gather information to see how best they can arrest the supposed driver who actually did that act.”

When police officers got to the scene, they discovered that the body was that of Constable Maatey and investigations immediately commenced, leading to the arrest of the Aduana Stars center back.And he is yet to be charged by the police.

He has featured 10 times this season for the “Aduana Ogya Ogya” boys and was looking forward to adding to his tally before this misfortune. He played a key role in their massive win against Wafa on February 7, 2021. 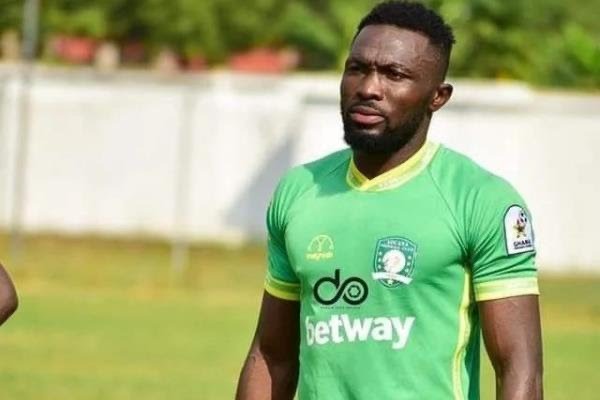 We Are Bent on Stopping Kotoko’s Unbeaten Run - Kobby Mensah

Checkout Photos Of The Plus Sized Model Known As Alexis Fenton