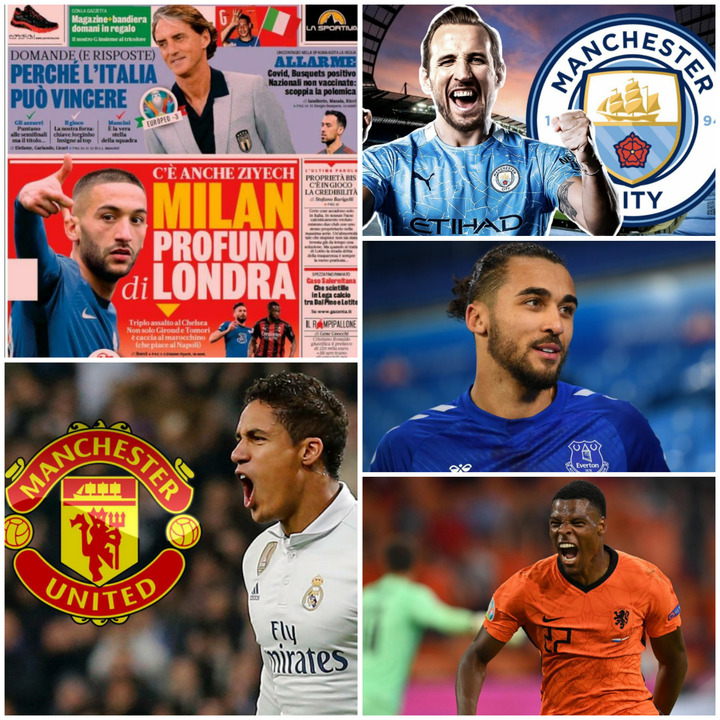 Good morning our cherished followers, we come your way with another edition of football titbits. Check out the Wednesday's transfer news.

Italian giants, AC Milan have shown interest in 28 year old Chelsea winger, Hakim Ziyech and readying a move for the Moroccan this summer. The club is desperate to sign a new creative midfielder ahead of next season, following the departure of Hakan Calhanoglu to Inter Milan. The Rosseneris believe Hakim Ziyech is one of the few affordable creative midfielders in the market and will make an attempt to lure the winger. The blues have already denounced their openness to let Ziyech leave and will sanction the deal if Milan meets his €35m asking price.

German champions, Bayern Munich are plotting a move for highly rated Norwegian striker, Erling Haaland next summer. Bayern are reportedly looking to make the 20 year old Robert Lewandowski's longterm replacement next two seasons. Reports from German outlets say, the Bavarians wouldn't want to make any move for Haaland this summer due to his exorbitant transfer fees but will make concrete attempt next year. Chelsea currently leads the race to sign the Norwegian hitman this summer, but if they are unable to complete the deal, they would face keen competition from Bayern and Real Madrid next summer.

Spurs are in talks with English striker, Harry Kane as they look forward to convincing him to stay beyond this summer. The 27 year told Spurs chairman, Daniel Levy his desire to leave the club this transfer window, after Tottenham Hotspur failed to secure a champions league spot. Manchester City remains the favourites to land the English attacker, however the Cityzens initial £100m bid was turned down by Daniel Levy, who is overly reluctant to let Kane leave.

Arsenal have registered interest in Everton striker, Dominic Calvert-Lewin as they look forward to boosting their firepower. The Gunners frontline experienced a surprising dwindled firepower last season despite having Aubameyang, Lacazette and Nketiah fit in most part of the season. The club is reportedly ready reinforce the team's striking armoury and believe the Everton hitman is the right man to bring in.

Netherlands and PSV Eindhoven full back, Denzel Dumfries has emerged as a transfer target for the Bavarians this summer. The 25 year old has attracted mammoth attention following his incredible output for Holland in the ongoing EUROS. The full back already has two goals and has contributed massively in three victorys for Netherlands. Everton, Arsenal and AC Milan were vying for the signature of the Dutch man, however latest news says Bayern Munich are also interested in signing Denzel Dumfries.

Manchester United remain desperate to improve their backline and have identified Real Madrid's center back, Raphael Varane as their ideal target. The French defender has a year left on his contract and has stalled renewal talks with Real Madrid, sparking speculations about an imminent exit. Manchester United have registered interest in the 28 year old, nonetheless the financially-demanding pursuit for their top target, Jadon Sancho, would limit their financial capacity to complete Varane's deal. The Red devils were willing to swap Paul Pogba with Varane to avoid Varane's exorbitant fees but reports from Madrid camp claims the offer has been rejected.