These are selected players from the nine(9) top leagues like the likes England, France, Italy, Spain, Germany, Turkey, Russia, Netherlands, and Portugal.

Stats: Dimitrievski was excellent today as he kept a clean sheet at home today. He made three(3) saves which came right inside the box, made a punch, and saved a penalty.

Stats: Despite losing at home to Besiktas, Veysel was very impressive. He had two(2) shots which led one(1) to goal, made five(5) clearances, one(1) clearance off the line, blocked five(5) shots, intercepts two(2), and 66.7% accurate passes.

Stats: Giacomo was excellent today as he helped his team to achieve success today against Genoa. He had four(4) shots which two(2) were on target that led to a goal, assisted one(1), made 63 touches, and accurate pass of 90.9%.

Stats: Bayern won 7 goals to nil against VFL Bochum and Sane played an instrumental role in this win. He had five(5) shots of which one lewd to a goal, he also assisted, created one(1) big chance, and made 74.3% accurate passes.

Stats: Kimmich had a splendid performance for his team against Bochum as he scored two(2) goals, created two(2) big chances, fouled twice(2), two(2) interceptions, and made an accurate pass of 90.2%.

Stats: Striker Toney was on fire today against wolves as his team scored two goals past them. He had three(3) shots of which one led to a goal, assisted, won a penalty, created one big chance, and was fouled four(4) times which was enough for a win, and was rated above all players on the field.

Stats: 21 years old Agalarov helped his team Ufa as they won by three(3) goals to two(2) of which he scored two(2), had three(3) shots on target, fouled four(4) times, 36 touches, and pass accuracy of 81.3% which was a solid performance for his team to win. 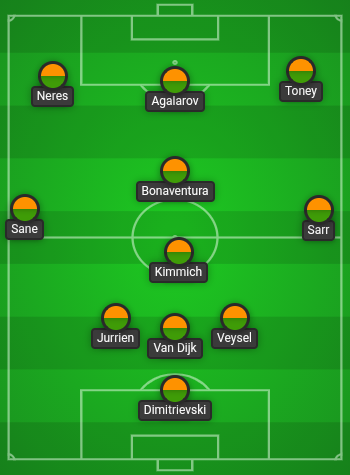