By NKBuabeng (self meida writer) | 14 days

Are These The Best Records In Football?

Football currently prides itself as one of the most patronized sports across the globe and has given its followers memorable moments to cherish forever.

The sport has given lovers of the game several emotions from joy, sadness, disappointments, anger, etc. 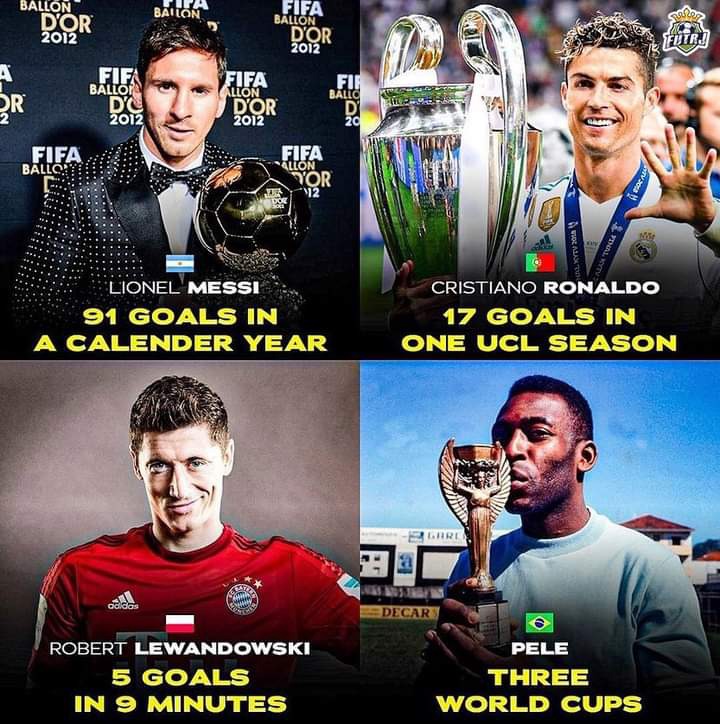 Every lover of the game has witnessed moments of craziness, incredible skills, and near-superhuman moments from the players of the game.

Today, we take a look at some records in football that are simply incredible and might never repeat.

The Polish striker stepped off the bench at half-time against Wolfsburg to score all Bayern's goals during a 5-1 comeback win on Tuesday, September 24, 2015.

Lewandowski scored the quickest Bundesliga hat-trick (four minutes), then set a new record for four goals in the same match and then did likewise for five, too.

The Only Player To Win 3 FIFA World Cups. (Pele).

Pelé’s first World Cup win came in Sweden in 1958, a tournament in which the phenom played an instrumental role. He provided an assist for a goal in his only first-round-match appearance, before scoring the only goal in a quarterfinal victory over Wales. He scored a hat-trick in the semi-final victory against France, before netting a brace in the 5-2 final over the hosts.

He would earn his second trophy in the very next tournament, in Chile in 1962, although his contributions would be much more limited. After scoring and assisting in Brazil's 2-0 opening win against Mexico, Pelé would injure himself in the very next match and miss the remainder of the tournament. But Brazil would continue down the path upon which they'd been set by their talisman in claiming a second straight cup, the last nation to do so and one of only two ever.

Pelé's third and final triumph came in 1970, returning to World Cup play after vowing to never play in the competition again in the wake of the brutally targeted tackling he suffered throughout the 1966 tournament. He made the right decision – not only did Pelé play well in Mexico, but he also won the Golden Ball, scoring four goals, the pick of which was the opener in the 4-1 final victory over Italy.

Besides Pelé, only 20 other men have ever won multiple World Cups, but none stayed good enough and relevant enough for long enough to capture a third and match the legend. Of those 20, eight of them won a trophy at a World Cup in which they never saw the pitch. And of those same 20 players, 13 won their double as part of the same teams in which Pelé played in 1958 and 1962.

Since Pelé's final win, only one country has won three World Cups, and it took Germany until the 2014 tournament to accomplish even that.

Messi's 91 Goals In A Calendar Year.

Messi’s 91 goals in 2012 were an insane achievement, and will probably remain the record for a long time.

To put that into context, Ronaldo, who is supposed to have the best odds of beating this record, has never crossed 70 goals in a year.

Messi had numerous factors that helped him achieve this. A strong midfield(best midfield trio ever?) behind him, good wingers supporting him, a strong defense, Pep, and Tito as managers, it was pretty much the same as the team from 2010–11. And of course, he is Lionel Messi.

Most goals by a player in a Uefa Champions League Campaign.

Cristiano Ronaldo currently holds the record for scoring the most Champions League goals in a single campaign, netting 17 times playing for Real Madrid during the 2013-14 season.

Real Madrid has eventually crowned champions that campaign, beating local rivals Atletico Madrid 4-1 in the final in Lisbon with the Portugal star converting a penalty deep into extra-time.

The victory was the year of La Decima for the Spanish giants, winning a record 10th European cup trophy.

The now-Juventus striker currently occupies the top three spots of the Champions League season scoring charts. He netted 16 times in the 2015-16 campaign, and 15 in 2017-18 - both for Real.

His former rival at Barcelona, Lionel Messi, occupies the fourth spot with 14 goals. The Argentina international shares a tally of 12 strikes with Ronaldo once again as well as Ruud van Nistelrooy and Robert Lewandowski.