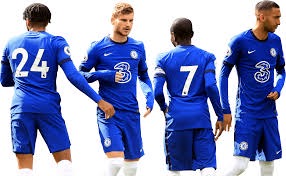 The national squads have been unveiled as nations prepare for Euro 2020, which will begin on June 11th.

Chelsea shocked everyone by winning the UEFA Champions League last season, and it will be fascinating to see how their great players perform in their country's colors.

Chelsea and Manchester City will both have 15 players represent their countries, the most in the Premier League.

Here's a list of five Chelsea players to keep an eye on throughout the campaign.

Gareth Southgate had chosen four right-backs in his 26-man squad for the European Championship, but Trent Alexander-untimely Arnold's injury means the young Chelsea man has a better opportunity now. Southgate stressed to the press after announcing his group that James has the ability to play several roles.

The 21-year-old defender served as a right-back, right-wing back, and midfielder during the recent campaign. To counter Jamie Vardy's rapid turn of speed on the break, Thomas Tuchel used him on the right side of a back three against Leicester City in the FA Cup final. England manager Gareth Southgate is hoping that James can continue his excellent form at Euro 2020 and assist his team win the tournament.

Timo Werner's debut season in England was overshadowed by controversy around VAR and some shoddy finishing. He only scored six goals and added eight assists in 35 Premier League games for the Blues. The potential he possesses is not reflected in these numbers.

His performance improved significantly in the second part of the season. Despite his erratic season, Werner is likely to start the majority of Germany's games due to the lack of an undisputed number nine.

Mount has become a household name at Stamford Bridge following an enthralling season with the club. Although there were many doubts about who would make England's much-hyped final selection, his place in the national team was never in doubt.

The 22-year-old is well-known for his deft passing and imaginative play. Despite lacking the breakneck speed of Marcus Rashford or Raheem Sterling, he has a fantastic ability to play perfectly weighted through balls that can open up defenses, as evidenced by his vital pass in the Champions League final.

Kai Havertz, like Timo Werner, struggled to adjust to life in England. He did, however, score the game-winning goal in the Champions League final against Manchester City.

The Germans will be banking on him to create a large number of opportunities and form an international partnership with Werner. He has the ability to light up the event with his flare at the early age of 21.

It's fair to say that Kante was the driving force behind Thomas Tuchel's meteoric rise at Chelsea. In both the semi-final legs and the finals, the Frenchman was named man of the match. He's a defensive workhorse who, according to many, can do the job of two players.

Paul Pogba will be able to play in a more free role as a result of his presence in the center of the park, which he lacks at Manchester United. If Kante can help France win Euro 2020, he will be considered for the prized Ballon d'Or award.