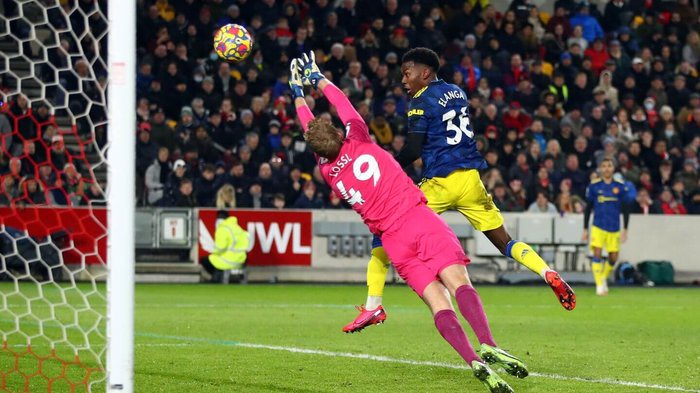 Manchester United won 3-1 against Brentford on Wednesday night, bouncing back from their defeat at Villa Park.

Ralf Rangnick's side scored three goals in the second half, including Anthony Elanga, Mason Greenwood, and Marcus Rashford.

Elanga scored the game's first goal with a neat finish after Fred brilliantly found him out with a clipped ball over the Bees' backline.

In a brilliant play from the visitors, Greenwood doubled United's lead. Bruno Fernandes ran in behind Brentford's defence and teed up Greenwood, who had an empty net to aim at, thanks to Cristiano Ronaldo's chest pass.

Rashford came on as a substitute and scored a confidence-boosting goal to secure the three points. United launched a brilliant counterattack after Scott McTominay won the ball in the middle of the pitch. He then released Fernandes, who slid Rashford in behind Jonas Lossl and he smashed the ball past him.

Five minutes before the end of the game, Ivan Toney scored a consolation goal for the home team.

Brentford will be kicking themselves for the chances they missed in the first half, but United did have a superb David De Gea in goal.

If Thomas Frank's team had taken their chances, the pressure on United and Rangnick would almost probably have increased. Instead, Frank has suffered three straight defeats, and Brentford has only won one of their previous five games.

Rangnick switched to a back three after Cristiano Ronaldo scored a 2-0 lead. As you can think, the Portuguese striker was not pleased, but it ensured that United, unlike last weekend, were able to keep their advantage.

Brentford return to play against Wolverhampton Wanderers on Saturday. United will play West Ham United at Old Trafford, where they will face their former boss David Moyes.