By rexfthug20 (self media writer) | 8 months ago 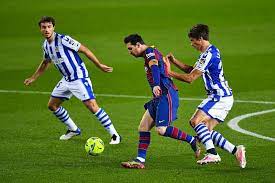 Barcelona proved they can evidently chase for the league title with 62 points, Obviously, they are 4 points behind ATN and two ahead of Madrid. Messi managed to break xavi all time mark on the 78th appearance for the Catalan squad. Barcelona player Griezmann score the first goal at 36th minute as well as Dest manage to score a goal assisted by Messi, which makes Barcelona lead before halftime. During the second half Dest struck again and scored another goals when Sergio Busquets pass to Messi was controlled well. However, Dest two goals effort becomes the third United States international score. After, a goal from Dembele on the 71st minute, Real Sociedad player Ander Barrenetxea had a best goals for his team for a rare moment of joy.

The Final goals was scored by Messi on the 89th minute which becomes his 23rd league goal of the season. He probably increased his lead of the top scoring charts.

Content created and supplied by: rexfthug20 (via Opera News )