Reigning Ghana Premier League, GPL champions Accra Hearts of Oak leads the standing in terms of the club with the most red cards in the ongoing competition.

The Phobians who are seeking to defend their title, have received four red cards after Matchday 28 of the competition and, with six matches to end the campaign, they will need to keep their disciplinary level on a high if they hope to make good on their ambitions for the season.

Closely following Hearts of Oak on the red card table is their bitter rivals Asante Kotoko who have had three players sent off so far in the 2021-22 campaign. 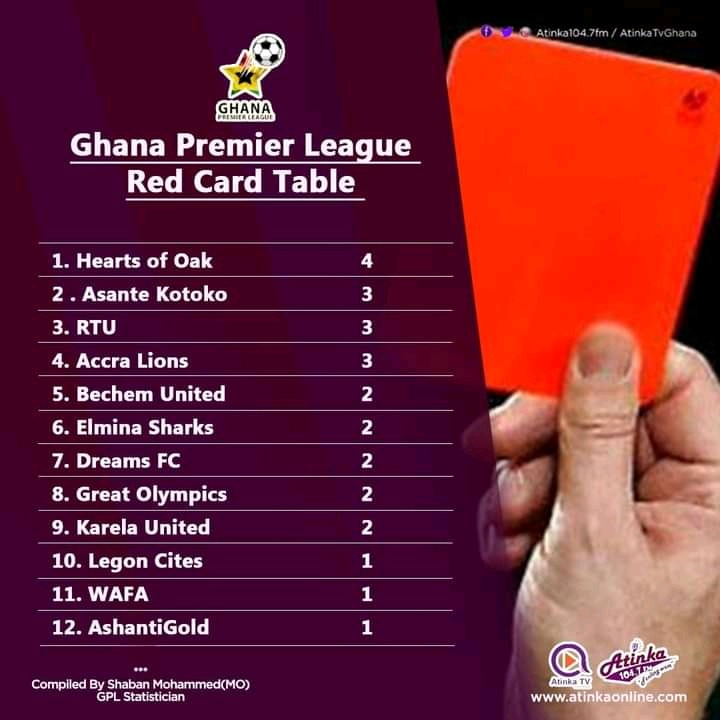 The Porcupines lead the standing by nine points as they seek to win a first GPL crown since the season of 2013/14.

Coach Prosper Nartey Ogum will need his charges to remain focused for the rest of the campaign as they target the ultimate.

Real Tamale United, RTU and Accra Lions have also had three players sent off this season and, this is not a good return on their disciplinary actions as they both seek to retain their GPL status for next season.

RTU are heavily involved in the relegation zone and, they will need their players to keep their heads above water as they attempt to stay up.

The same goes for the GPL debutants, Accra Lions who have moved up the table sturdily with their outings recently.

With two red cards each after the last round of matches are Bechem United, Dreams FC, Elmina Sharks, Great Olympics and Karela United as the season heads to a close.

Legon Cities, WAFA and AshantiGold SC all have a sending off to show for so far in the ongoing top-flight championship in Ghana.

5 Fantastic Benefits of Moringa for Men

Top Reasons for the High Robbery in this Part of Ghana