Champions league team of the week has been released; most balanced team but Bayern dominates

By Raysportz (self meida writer) | 13 days

This weeks Champions league was one of the toughest as every team want and ready to move to the next stage of the competition. The Champions league holders hosted PSG at the Aliens arena and Porto also hosted Chelsea in Spain (a neutral ground). PSG shocked Bayern Munich at home by scoring three past them and securely a win at away. Chelsea also managed to hold onto a though Portuguese side Porto and also won by two goals to nothing. Mount and Chilwell scored the only goals of the match. The Champions league team of the week has released.

In goalkeeping, Edouard Mendy was chosen as the best keeper of the week achieving 8.25 score out of 10. He has only conceded one goal in this season's champions league.

The defence in one of the most balanced as compared to other previous weeks. Each player came from a different team comparing with each other. One player came from Bayern Munich, Real Madrid, PSG and Chelsea each. The players were Pavard, Militao, Marquinhos and Ben Chilwell. 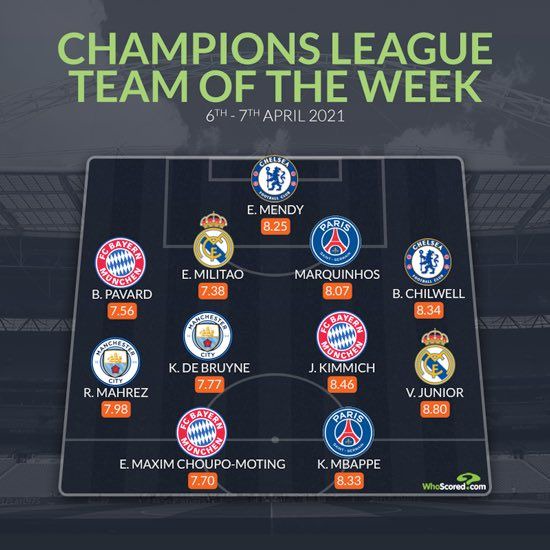 In midfield, Vinicius Junior jumped into the team with two goals behind his name as Riyad Mahrez and De Bruyne from Manchester city and Joshua Kimmich from Bayern Munich joined him.

Lewandowski's replacement Choupo-moting didn't disappoint by scoring against PSG and also putting up a nice performance and undoubtedly Mbappe was part of the team. Mbappe is proving to be the best striker in th champions league this season with goals all over his name