By mightysagacious (self media writer) | 1 year ago

This is what has been reported from our side before reading this article please follow and like us to get in touch with more details in the entertainment center and other centers. 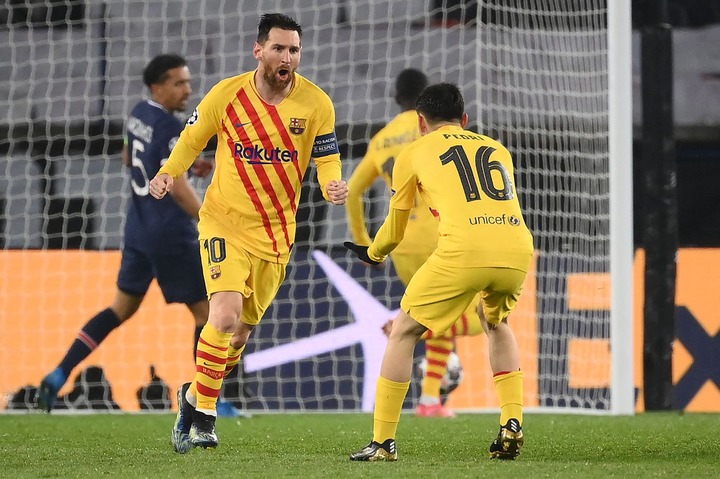 Koeman took a major risk to play an unfit Gerard Pique and a worn-out Sergio Busquets, who clearly isn’t cut out for these kind of games anymore. Ultimately, his team selection worked to PSG’s favour as they punished Barca’s vulnerabilities.

Koeman’s decision to overly protect his backline resulted in his attack suffering and his defensive shape was poor, with PSG repeatedly beating their offside trap with moves through the wings. His substitutions were too late and did little effect. Wasn’t helped by individual mistakes too but his pragmatic attitude today is also a big reason behind this damning loss.

Ter Stegen could do nothing to deny Mbappe’s rocket but pulls off a brilliant save from Kurzawa’s attempt in the 35th. Then denies Kean with a smart save in the 38th. Then makes another terrific save to keep out Kean’s deflected attempt with a strong one-handed stop in the 50th. Very unlucky to concede 3 more after his brilliant saves, but nothing he could’ve done to stop either goal on the day.

The USA international faces a daunting challenge against the menacing Mbappe. Caught slightly out of position in PSG’s equalizer. Then played on Florenzio and lost track of Mbappe leading to his second. Looked nervous against the Frenchman’s pace and lacked any threat in the attack. Taken off after PSG’s third.

After having played his last game in November, Pique returns from a nasty injury when Barca needs them the most. Didn’t really make any damning errors like his partner, but didn’t look up to the race against the pace of PSG. Didn’t really do his best to keep Icardi or Mbappe quiet either.

Lenglet was absolutely bamboozled by Mbappe for his strike, with the Frenchman going past him too easily to score from yards out. Again caught napping for Kean’s strike, allowing him too much freedom to snap in his header into the goal. Along with his poor mistakes, Lenglet never looked comfortable defending against PSG’s pace and was caught napping multiple times.

Alba is making some really promising forward runs, but missed his clinical delivery in the first half. Lost track of Florenzi and allowed him to burst into the area too easily to force Mbappe’s second. His attacking thrust was shut down by Kean & co today and Alba was again error-prone defensively.

The 18-year-old midfielder plays his biggest UCL game ever today. Played a brilliant threaded pass to send Griezmann through on goal in the 14th. Makes a crucial clearance five minutes later to deny PSG a goal.

After that defensively he wasn’t the sharpest, but still looked Barca’s brightest output in creating stuff from midfield. Every time he had the ball, he looked to create something special and troubled PSG with his diverse passing. Just not clinical enough with his final passes.

The oldest in the Barca midfield is trying his best to make good use of his intelligence to close down spaces for PSG’s midfielders. But his lack of speed cost Busquets, as he was unable to press the PSG midfielders or stop their fast-paced attacks as efficiently as he’d want. Subbed late on after visibly growing tired into the game.

De Jong was very lucky to earn the penalty for Messi’s strike, as the ‘foul’ leading to it looked like the Dutchman had actually tripped over himself rather than actually being impeded inside the box. After that, he struggled to ensure that his side dominated the game and was too safe with his passing. Couldn’t do much to shut down PSG’s midfielders and ultimately lost out the midfield battle.

With rumours circulating over his future, Messi looks to create a nightmare for his (potential) future team. Made no mistake when given a penalty, blasting it into the top corner to get the party rolling for Barca. Messi quickly realized after that that he’d need to get things started by himself, opting to drop deep into midfield to do so.

Actually did create a couple of decent chances but his teammates were just not lively enough on the day. Barca’s best player in a dull day.

Griezmann got a big chance to open the scoring in the 14th after brisking int a great scoring area, but saw his effort saved. Carried the ball forward superbly in a thunderous counter-attack in the 37th, only to see his shot graze agonizingly wide of the target. Nearly scored a fortunate goal in the 82nd after some decent pressing, when Navas’ botched clearance hit him but went wide.

Worked very hard to get something for his side and linked-up really well in the final third too. Just not fortunate enough to get a goal in the end.

Dembele has enjoyed great form in the UCL this season and looks dangerous with his movement early on. GOt a big chance to double his side’s lead minutes after Messi’s opener, but his weak right-footed attempt from close range was easily saved. Burst past Kurzawa with a brilliant move in the 76th, but his shot blazed over.

His crossing or general delivery from the right wing was poor and the Frenchman couldn’t at all damage PSG’s ‘weak link’ on his side. To make things worse, he missed crucial chances which shifted the tides of the game too!

Mingueza came on for Dest to give more of an attacking edge to Barca, but was not really able to create anything in the final third of the game.

The tricky winger showed off some nice link-up play with Messi, but ultimately unable to make any difference in the result.

Puig did nothing more than make a few nice passes in midfield towards the end, which weren’t really threatening enough to trouble PSG.

Operated very deeply to create any goals for his side and his set-pieces weren’t really that good today either.

Braithwaite got himself in a prime goal-scoring position towards the end, but Marquinhos denied him a possible goal with a solid block.

MAN OF THE MATCH

Messi was Barca’s best today, but this definitely goes to Kylian Mbappe. That was his best performance in a PSG shirt ever and he was just an absolute beast today. Definitely my MOTM today.

Barcelona are out of this season’s Champions League but gave themselves and the fans reasons to be proud after a 1-1 draw at the Parc des Princes in the Round of 16 second leg against PSG. Barça played a truly exceptional first half and could have gone into the break with a lead of at least three goals, but a combination of poor finishing, questionable refereeing and a great night for PSG goalkeeper Keylor Navas led to a draw and a graceful European exit for Barça.

Barça played one of their best halves of football in recent memory in the first 45 minutes, dominating possession, pressing PSG to near suffocation and controlling the threat of Kylian Mbappé on the counter-attack almost perfectly.

The first 25 minutes were truly sublime, and Ousmane Dembélé was unplayable. The Frenchman required two amazing saves from Navas and played a great cross that Lionel Messi couldn’t reach for a tap-in, and Sergiño Dest hit the crossbar for good measure.

Barça should have scored at least twice in that amazing start, but they couldn’t and were then punished by three minutes of madness, which started with Óscar Mingueza receiving a yellow card then almost being sent off 30 seconds later for two bad fouls on Mbappé, and then Clément Lenglet accidentally stepped on Mauro Icardi’s ankle and was called for a ridiculous penalty after a VAR check, and Mbappé scored from the spot to give PSG the lead.

Barça could have collapsed after those three minutes but quickly picked themselves up and continued to attack, and Lionel Messi scored one of the greatest goals of his career with a rocket from 35 yards to equalize and give Barça life. Then, just before halftime, Layvin Kurzawa kicked Antoine Griezmann inside the box and there was a giant chance for the Blaugrana.

Messi stepped to the spot, took a poor penalty and Navas saved it against the crossbar. At halftime, a spectacular Barça deserved to be at least three goals up, but the game was somehow 1-1 with an impossible job for the Blaugrana to do in the second half.

Barça worked so hard in the first half that they were bound to have a drop in energy in the second, and that’s exactly what happened in the first 15 minutes or so of the final period, though the Blaugrana still did an excellent job of stopping Mbappé who was quite simply dominated by Junior Firpo in that period.

PSG’s plan was to defend all match and with the Mbappé threat completely neutralized by Barça, all the home team could do as we reached the final 10 minutes was park the bus and hope for no more troubles until the final whistle. Ronald Koeman sent as many attacking players on as he could, but Barça looked completely out of energy to come up with three goals in the dying seconds.

The Blaugrana never gave up but couldn’t find another goal, and the final whistle came to officially end their European journey this season. But this was a night of encouragement, courage and pride for a team that refused to quit and put up as good a fight as they could have done.

Frenkie De Jong and Junior Firpo were immense at the back, Messi had his best European performance in a while and Ronald Koeman put together a great plan to stop Mbappé. Now it’s all about La Liga and the Copa del Rey Final for the rest of the season, and I am confident in this team now. They’ve made me proud. Thank you for the fight, boys.