Dias and Fernandes miss out on Premier League Team of 2021

By Firstdaynews (self meida writer) | 24 days

With the first international break of the year underway, now is the ideal opportunity to take stock of 2021 so far.

Manchester City have put the afterburners on in the title race since the turn of the year and are romping towards their third Premier League title in four years leaving those behind them to battle for the top four.

With a record of 15 wins from 16 league matches in 2021 and 43 goals scored with only nine conceded, it comes as no surprise to learn Pep Guardiola’s side dominate the best WhoScored rated XI. With that, it’s time to run through the team starting from back to front.

Only two goalkeepers have kept more clean sheets than Emi Martinez (6) in the Premier League in 2021 and the Aston Villa hero has been made to work for those, ranking top in the division for saves made (54). As Villa have struggled offensively of late, Martinez has grown even more important for Dean Smith’s side.

One of this season’s real success stories has been Joao Cancelo, having previously underwhelmed for Manchester City. With Cancelo often coming inside from full-back to provide greater bodies in central areas, the Portugal international has developed into one of City’s most important players this season. Cancelo ranks top for successful dribbles of all defenders in the league in 2021 (25), while managing at least one shot in 10 of his 12 league starts this year. He has played a direct hand in three goals in that time.

One of Thomas Tuchel’s first big changes as Chelsea manager was to reinstate Cesar Azpilicueta in defence and the Blues now look far more secure at the back. In fact, Chelsea have kept seven clean sheets in the 12 league matches Azpilicueta has started this year. Moreover, a return of 97.4 touches per game ranks second of all players that are eligible for this XI. Chelsea are now dominating games with the ball and Azpilicueta is a vital part of that process.

Another major success story has been the resurgence of John Stones. Stones was City’s fourth-choice centre-back at the start of the season but is now part of the best defensive pairing in the league alongside Ruben Dias. No outfielder has been involved in more clean sheets than Stones this season (8). Remarkably, City have conceded only more goal in games Stones has started in 2021 (5) than he has scored himself (4). Stones has emerged as one of the best defenders in the league in recent months and has deservedly earned an England recall in the process.

The back four is full of redemption stories, with Manchester United’s Luke Shaw capping it off at left-back. Shaw has been one of United’s best players this season and has earned his way back into the England squad as a result. The 25-year-old has played a direct hand in more goals than any other defender in the Premier League in 2021 and has remarkably created the most goalscoring chances (36) in the division.

Ilkay Gundogan has taken his game to a whole new level since the turn of the year, particularly excelling when key man Kevin De Bruyne was out injured. A return of 12 league goals for the season is as many as he managed in his previous three campaigns combined for City, with 11 of those falling this side of the year. In fact, no player has scored more goals than Gundogan in the Premier League in 2021, an incredible feat for a central midfielder. 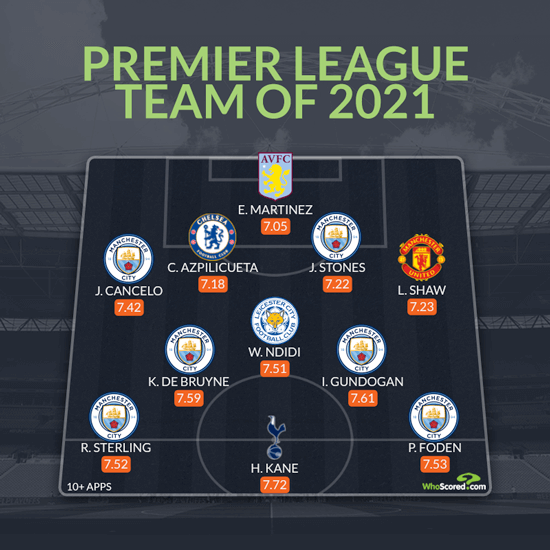 It continues to amaze that no big club has taken a serious look at Wilfred Ndidi, as he continues to grow from strength to strength for Leicester. No player has made more tackles and interceptions combined than Ndidi in the Premier League in 2021 (66), with the defensive midfielder even turning creator of late with three assists in his last six league outings.

Completing our midfield three is City star Kevin De Bruyne, who has played a direct hand in seven goals in nine league starts in 2021. De Bruyne has had at least one shot and registered at least one key pass in every league game this year and continues to excel for Pep Guardiola’s side despite missing a chunk of the year injured.

The penutlimate Manchester City player in the XI, Raheem Sterling has had a direct hand in seven league goals this year, scoring five times for the runaway Premier League leaders. Sterling has made at least one key pass in all but one of 11 league starts in 2021, and completed at least one dribble in all but one league start this year. Only seven of his 12 appearances have seen him return a WhoScored rating lower than a 7.50 and it means the 26-year-old features with an average of 7.52.

Leading the charge is the best rated player of 2021 so far. No player has had a direct hand in more league goals than Tottenham's Harry Kane (11) this year, with his eight goals second only to Ilkay Gundogan (10). The 27-year-old's unwavering confidence in front of goal has helped him to those eight league goals in 2021 with 47 shots more than any player, contributing towards his inclusion.

Rounding off the XI is the sixth Manchester City player to make the cut. Phil Foden has really come into his own for Pep Guardiola's side this year, with nine of his 14 league starts coming in 2021. The 20-year-old rose to the occasion in style with his best rated performance of the campaign coming in City's 4-1 win at Liverpool back in February. Of the 11 league goals Foden has contributed to in the Premier League this season, eight have come in 2021, accentuating his rapid development into a world class star.