There are results of the Ghana Premier League week 34

The Crosby Awuah Memorial Stadium saw the action between Karela United and West Africa Football Academy on the last day of the Ghanaian premier league 2021/2022 season, The Host took the lead through Umar Bashiru in the 49th minute, this goal marked his 14th of the season, his goal became the deciding goal of the game sending the Academy boys to the division one as they failed to equalize during the match. 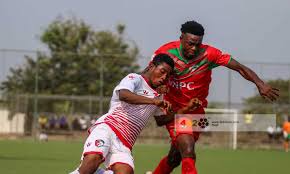 Elmina Sharks drew with Accra Great Olympic in a spectacular comeback fashion at the Paa Kwesi Nduom Sports Stadium this afternoon, The Visitors scored twice in the first half through Samuel Ashie-Quaye and Varney Boakai in the 27th and 32nd minutes respectively ending the first half 0-2 in favour of Olympics

The host came back stronger in the second half scoring in the 58th minute by Yusif Chipsah with Francis Gyetuah scoring the second in the 64th minute. This result means that the Olympics has secured the fifth position ahead of Accra Heart of Oak in terms of Head to Head, Sharks are already relegated. 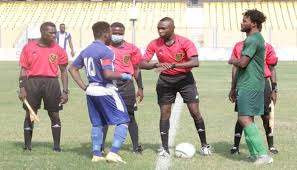 Surprisingly Medeama lost 2 -0 to Dreams Fc at Dawu, Two goals from Ibrahim Issah on both halves were enough to win the match for Dreams thereby securing their stay in the Ghana Premier League.

Medeama who has been in excellent form lately was poor during the game, despite the result, they have secured the second spot on the league table with 56 points meaning Kumasi Asante Kotoko won the league with 11 points gap

Legon Cities were defeated by Kumasi King Faisal babies at the Baba Yara stadium this afternoon, the host took the lead in the first half by goals from David Oppong with the half ending 1-0 after the recess Enock Morrison double the lead for King Faisal in the 70 minutes, Legon cities consolation goals came in the 71st minutes through veteran midfielder Hans Kwofie, both teams are secure in the league

Accra Heart of Oak lost again to newly-promoted Real Tamale United in the last game of the season this defeat marks their fourth straight loss in a row, Hearts loss1-4 to RTU with goals from Black star player David Abagna, Mo Alhassan’s and a double from Ronald Frimpong Hearts Of Oak consolation came through Seidu Suraj. RTU stays in the premier league after this impressive victory away from home

Goals from Clinton Duodo of Bechem United and Berekum Chelsea Edward Kpodo ensured that the game ended in a draw at the Nana Gyeabour park, This draw means that Bechem United secure the 3rd position in this year's Ghana Premier League with 54 points, Berekum Chelsea, however, are safe on the 7th position with 47 points 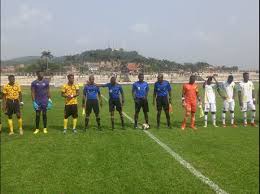 At the Bibiani park, Goldstars played a 2-all draw with Ashgold this afternoon the goal scorers were Yaw Annor with a brace likewise Joshua Akoto of Goldstars also scored twice. Gold stars are safe with 46 points and 10th on the league log

Per these results, Asante Kotoko leads the table with 67 points, Followed by Medeama with 56 points, Bechem United with 54 and Karela with 52 making the top 4 of this year's Ghana premier league 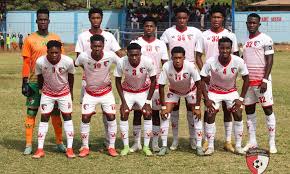 These teams are relegated to the lower tier of the Ghana football Eleven Wonders, WAFA and Elmina Sharks