Three matches have been lined up for live TV broadcast this weekend as the penultimate round of matches in the Ghana Premier League, GPL are cleared on Sunday.

This live TV telecast will include the coronation game involving Asante Kotoko who will be crowned winners of this season's championship after their game with Elmina Sharks.

All the matches in the GPL this weekend will be played on Sunday on a weekend that could see the relegation bracket become clearer as the games. 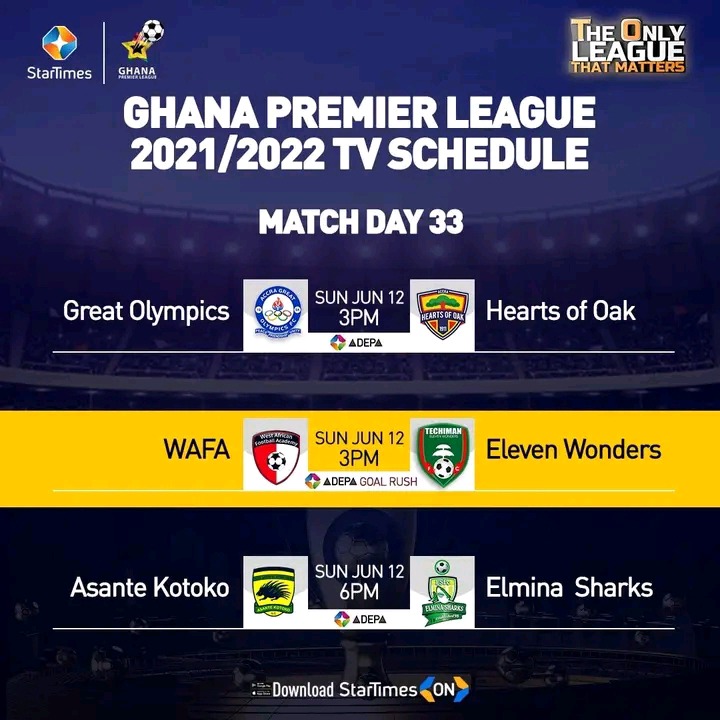 At the Accra Sports Stadium, a capital derby will be in store when Great Olympics hosts Hearts of Oak in the fore noon.

The game will kick-off at 3:00pm and, it will be televised live on the StarTimes Adepa TV channel worldwide.

A relegation battle will be fought at the Red Bull Arena, Sogakope where WAFA and Eleven Wonders will slug it out for the three points for obvious reasons.

This Matchday 33 fixture will be live on the Adepa Gold Rush TV channel on the StarTimes network starting at 3:00pm local time.

Later in the evening at 6:00pm in the Garden City, Asante Kotoko will host relegated Elmina Sharks at the Baba Yara Stadium.

Asante Kotoko will receive their medals, ribbons and trophy as winners of the 2021/22 campaign after this encounter.

All the action will be captured live on the StarTimes Adepa TV channel as the Porcupine Warriors are honoured for their hard work this season.

There will also be live updates on the rest of the Matchday 33 games to be played on Sunday at all centres nationwide as the live TV broadcast are aired.