By FreshGist.gh (self media writer) | 2 months ago

The Porcupine Warriors even though performance has been poor in their last five matches played still have the upper hand to win today's encounter.

With 56 points so far on the league table, Asante Kotoko will need today's point to extend their lead to 59 points with four matches left to go all things being equal.

However, the Porcupine Warriors are under pressure following their last week's defeat to Berekum Chelsea in the Kumasi Baba Yara Sports Stadium.

Asante Kotoko this season's away performance has been very phenomenal as they have managed to pick points from all tough grounds.

Into matchday 31 action against Medeama SC today, here are some statistics that show the Porcupine Warriors are ahead of Medeama SC in today’s encounter.

The Porcupine Warriors came from behind to defeat Dewu Dreams FC in matchday one of the Ghana Premier League at the Accra Sports Stadium.

Asante in their second away match managed to steal a point from tough ground Enyinase Crosby Awuah Memorial Park after playing 0:0 with the home team.

The Porcupine Warriors through Isaac opposing picked all the three points from another difficult ground Dun’s Park in Bibiani first club this season to hold that records.

The Porcupine Warriors after so many years deploy good tactics as they managed to pick the first away win from Dormaa Ahenkro Park.

Dr. Prosper Nartey Ogum and his boys, played another fantastic game as they picked a vital away point from Berekum Golden City Park.

The Porcupine Warriors also managed to pick a vital away point from Techiman Eleven Wonders after playing one of their tough games on the day.

Dr. Prosper Nartey Ogum, leads the Porcupine Warriors to defeat West Africa Football Academy by goal to nothing to pick all the three points from Sogakope RedBull Arena.

In today’s encounter, the Porcupine Warriors have the upper hand in defeating Medeama SC to keep their away performance records.

However, Medeama SC will try to prove stubborn by defeating the Porcupine Warriors to close the league table gap to three points. 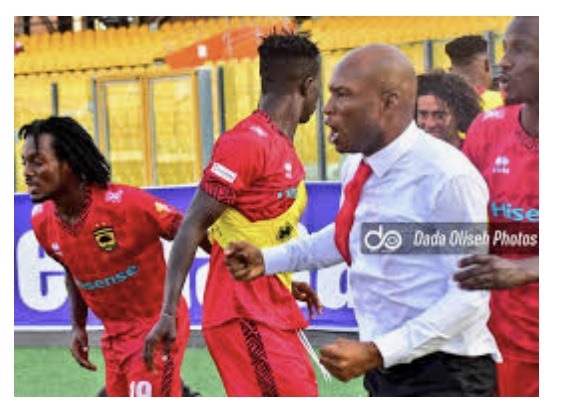