These are players who did well in this week league games according to sofa score statistics based on 3-4-3 formation.

Stats: Karl denial Leeds United nine(9) times to goals as he was rated high above all players on the field. He had nine(9) saves three coming from the box which was a solid performance for a win or draw.

Stats: Chelsea won against Tottenham by three(3) goals to nil on an away trip and thanks to Rudiger who also played part in this victory. He scored one(1), made two(2) clearances, two(2) interceptions, sixty-one(61) touches, one(1) key pass, two(2) shots on target, and pass accuracy of 90.2%.

Stats: Silva was excellent against Spurs as he scored his first goal this season. He had two(2) shots on target, made 74 touches, six(6) clearances, three(3) interceptions, one(1) successful tackle, and pass accuracy of 85.0%.

Stats: Kante came off the bench to score for Chelsea against Tottenham. He had one(1) shot on target, one(1) key pass, two(2) successful tackles, 40 touches, created one big chance and made 87.9% accurate passes.

Stats: Arsenal has now won two(2) games in a roll following the tragic start to the season. Arsenal against Burnley on away and won by a goal to nil, all thanks to Odegaard for that brilliant finish. He had two(2) shots, two(2) successful tackles, one(1) clearance, two(2) key passes, blocked one(1) shot, made seventy-six(76) touches, and 83.9% accurate passes.

Stats: Sarr played an excellent game against Norwich City this weekend. He scored two(2) goals, had 5 shots on target, created two(2) big chances, and made 93.1% accurate passes which grant his team a win.

Stats: Benahma had a good game against Manchester United today despite losing. He scored one(1), three(3) shots on target, created a big chance, and pass accuracy of 70.7%.

Stats: In-form striker Toney was on the heat against wolves as his team won by two goals to nil. He had three(3) shots of which one led to a goal, assisted, won a penalty, created one big chance, and was fouled four(4) times, and was rated above all players on the field.

Stats: Liverpool won against Crystal Palace by three(3) goals to nil of which Salah scored, made five(5) shots on target, 67 touches, fouled once, two(2) key passes, and 81.0% accurate passes. 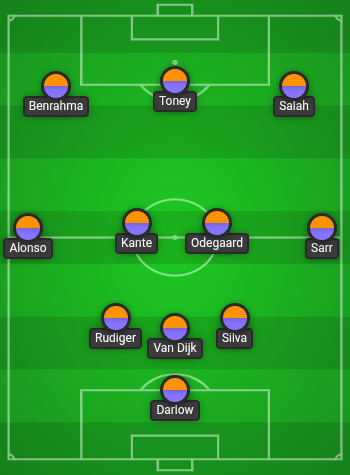