By HonEhEs (self media writer) | 2 months ago 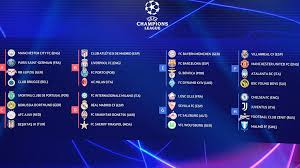 Champion League is here and very soon we will be watching it live on our screens and witnessing performances from our favorite teams and sportsmen and women.

This season's Champions League will be fun as every team in this competition is ready and can be a champion.

Now let's get straight to what you should expect on match-day one this coming week.

With Christiano Ranaldo back to reunite with his former team, Bruno and Pogba on from Manchester United are one of the favorites to win the Champions League. Young Boys on the other hand are doing well and are unbeaten in six games but facing Manchester united is a no-go area for them.

Meetings: Both sides have met on two occasions of which united came victories with a scoreline of 1-0 and 3-0 respectively.

Prediction: Manchester United to win and over or to score 3-4 goals.

With Barcelona have memories with Bayern following eight goals to two(2-8) the last time they met will be more cautious this time around.

Barcelona and Bayern both are doing well in their leagues but that of Champions League for Barca is not known following the departure of their star player(Lionel Messi). Bayern has a solid and full squad entering this game who are poised to win every competition they are in.

Meetings: The two sides have met on seven(7) occasions of which Bayern won four(4), lost two(2) and drawn one(1).

Prediction: Both teams to score and over or Bayern to win and score 2-4 goals. The champions of Europe 2020/2021 are here again and with the arrival of Lukaku(who had an impressive season with inter Milan last season), have boosted their confidence level of winning this year's champions league again.

Zenith on the other hand is an excellent side who can give you a very exciting game when football is concerned but playing against current Champions will be very difficult for them.

Meetings: The two sides have never met before.

Dortmund is in high-scoring alert and will go into this game with the same motive to score as many as possible. Although the home side is having excellent form in their league after the arrival of Batshuayi, they may find it very difficult to beat Dortmund as the champions league is concerned.

Meetings: Both sides have never met and it will be a very intriguing game since both don't know each other's style of play.

Prediction: Both teams to score and over or Dortmund win and score 2-4 goals.

The kind of squad, PSG has this season is enough to win everything including the Champions League.

Club Brugge is a good side who keeps representing the Belgium Top-plight league almost every season.

Meetings: Both teams have met twice and PSG became victories without conceding a goal.

Losing the Champions League to Chelsea has made City too ambitious and will do anything they can to achieve success right from the group stage. Leipzig on the other hand is not consistent with their performance based on their league games and playing against a side whose desire is to win the Champions League like PSG will be very difficult for Leipzig to beat.

Meetings: Both sides have not met before

Atletico Madrid and Porto have met each other six(6) times and both have won twice and drawn one.

Prediction: Atletico to score at home

Liverpool and Ac Milan are having a good run of form in their league lately and would expect it to reflect in the champions league as well.

Liverpool has a full and solid squad who can play against any team and with that is an edge, unlike Ac Milan who has been in and out of the Champions League for a while now.

Meetings: Both have four(4) and Liverpool have won thrice and drawn one.

Prediction: Both teams to score and over or Liverpool wins

Both sides are having an excellent start to the season in their various leagues and will hope to continue with it. And with such motive in mind, a draw is imminent.

Meetings: Both have met on four(4) occasions of which two in the Champions League and the other two in the International Champions Cup. Real Madrid has won three and drawn one.

Prediction: Real Madrid wins or both teams to score