By HonEhEs (self media writer) | 27 days ago

These are players who did well in this weekend league games according to sofa score statistics based on 3-4-3 formation.

Stats: Wolverhampton had a very tight game against Southampton at away but won by a single goal and all thanks to Goalkeeper Jose Sa who assisted Jimenez.

On that faithful afternoon, he had 6 solid saves, 3 coming from inside the box, created 2 big chances, 2 key passes, and an assist which was his best performance this season.

Stats: Aston Villa did work on United as they won by a goal to nil and defender Hause made that difference.

He had a shot on target which resulted in a goal, made a clearance, blocked 2 shots, 2 interceptions, and an accurate pass of 76.7%. However, he did commit a penalty but United missed it.

Stats: Mings did a magnificent job against United. He made 5 clearances on that faithful day, blocked 4 shots, made 4 interceptions, and accurate passes of 73.9%.

Stats: Ethan was very solid at the back against Liverpool although he didn't complete the full 90 minutes he was rated high above all players on both teams.

He scored one, cleared 5 chances, blocked shots, interceptions, 100% accurate passes, and a shot on target which was enough for a draw.

Stats: Bukayo Saka against Tottenham scored a goal, made an assist, 3 key passes, had 2 shots on target, fouled twice, made 3 tackles, a clearance, and 83.3% accurate passes.

Stats: Doucoure and his teammate Townsend were on target as they won against Norwich City at home by 2 goals to nil.

Stats: Raphinha following his move from Stade Rennais has been on form since. He has 3 goals so far this season and 3.2 shots per game.

Against West Ham this weekend, he scored a goal, had 2 shots on target, 81.0% accurate passes, 3 key passes, 2 clearances, 42 touches and fouled twice. He didn't complete all the 90minutes as he got injured in the 69th minute.

And that was an awesome performance.

Stats: Youngster Rowe had an impressive alongside his teammate Saka and was rated high above all players on the field.

He scored and assist, and also made 88.5% accurate passes, 2 key passes, a shot on target, and was fouled twice. Which was an impressive performance considering who they were playing against.

Stats: Antonio will never cease to amaze fans in every league game. Against Leeds, he was rated above all the players on the field and substitutes as well.

He had 7 total shots of which 3 were on target and one resulting in a goal.

Vardy scored an own on the 12th minute but came back and scored 2 goals on the 37th and 85th minute. 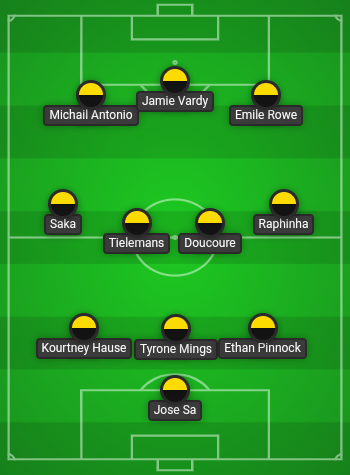