After the Spanish Super Cup final, Florentino Pérez spoke to Realmadrid TV. In his interview he said "I'm just like happy like all madridistas. 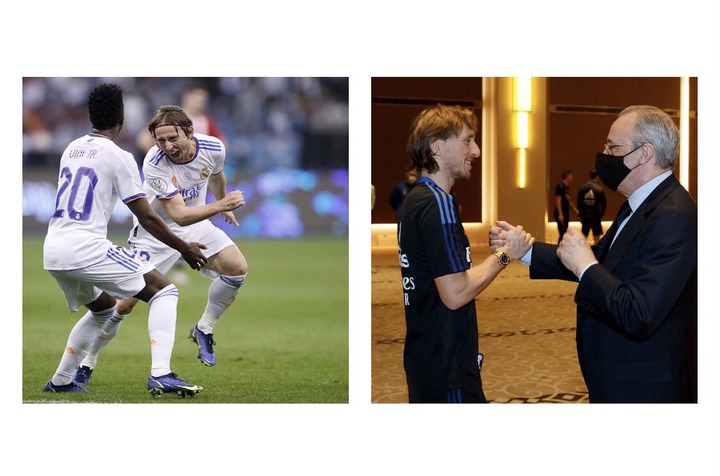 We're ecstatic to have won our first trophy of the season and to be off to such a strong start. With a new coach and fresh players, things have improved. We are overjoyed ".

"We are always striving to win. That was instilled in us from a young age. Last year marked my 60th year as a Real Madrid fan, and we were raised in this manner. I'm overjoyed to have won the season's first trophy ".

"It means a lot to win this trophy. We made adjustments and are now at a new stage with a coach who is quite familiar with us. We've also made some modifications in defense, and the results have been excellent thus far. We're happy and optimistic because we've changed course, which we wanted to achieve by winning ".

"So far, everything has gone smoothly. We must continue in this manner, with the same vigilance, and not let our guard down, because things will change if we do. I'm proud of what we've accomplished so far this season "..

"It was a typical Spanish Super Cup match, with two teams vying for the title. I'd want to congratulate Athletic on their performance "..

"I come from a Real Madrid heritage that was founded by Santiago Bernabéu, and everything we do is in order to follow in his footsteps."

"Marcelo is a legendary player for Real Madrid. He arrived at the age of 18 and has since developed into a world-class player.

I'm overjoyed that they gave him such a standing ovation in this city, where people are so knowledgeable about football and where there are so many madridistas."

"I don't want to brag, but they're both the best in the world at what they do." We have the best goalie in the world, and Modri is in such good form that he could win the Balon d'Or again."

"Madrid is a global club, and there are madridistas everywhere we go." It's not my fault; it's due to the club's history. Football is a global sport, and we are the most popular club on the planet. We are overjoyed because we continue to satisfy all of our followers."

"I'd like to use this opportunity to express my dissatisfaction with the way we've been treated here and by the Federation's organization. Apart from winning the trophy, everything has been spectacular.

I'd also like to point out that Spanish football has had a fantastic week, which has been recognized by everyone across the world.

The atmosphere has been quite football-like throughout the week.

The Saudi fans have been extremely kind, and we have played as if we were at home here. I wouldn't mind returning. The Saudi Arabian supporters have been fantastic."

"I never mention the refs." I'm sure there were (penalties) if they gave them."

Liverpool sat down for Real Madrid to win the Champions League with just 1 goal. What they did wrong

Liverpool Has Been Beaten In The Champions League Final After A 1-0 Defeat By Real Madrid.