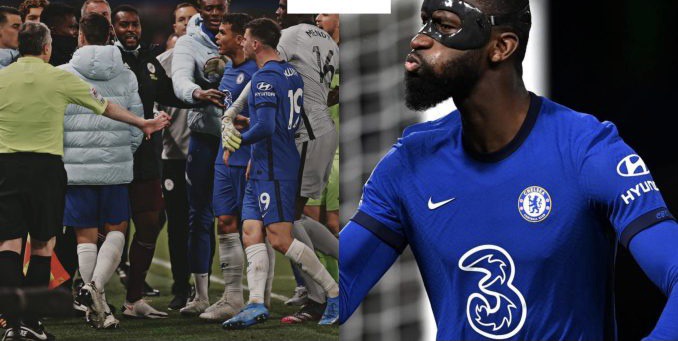 Blues bounced back from a disappointing 1-0 FA Cup defeat to Leicester to claim a superb 2-1 finish.

The hard fought victory began after two of Chelsea‘s goals were ruled out, both been scored by Timo Werner, coupled with an earlier penalty that was denied the side.

Antonio Rudiger booked a spot on the score sheet while Jorginho sealed the victory despite a last goal from Kelechi Iheanacho.

The game saw Thomas Tuchel continue him impressive stat of not losing three games in a row.

But not just was the game last night a bounce back, Chelsea stars took out the opportunity to teach Leicester City they must respect other teams according to Antonio Rudiger.

The defender revealed reason for the burst up was they needed to teach Amartey how to respect other clubs.

The Ghanaian Leicester star was seen in video clip on Saturday disrespectfully throwing Chelsea’s pennant after their 1-0 victory against the Blues.

It’s vivid the boys took the time out last night to revenge for such a disrespect on the name they represent.

Although the burst up had started when Ricardo went hard on Ben Chilwell and Rudiger angrily pushed him from behind.

Speaking on the incident, Rudiger said; “Unfortunately some people of their team don’t know how to celebrate and we had to punish them for this.

Don’t disrespect the club history. This is a bit bigger then you.”

Chelsea are now back on the third place with 1 point ahead of Leicester City.

We must go all out against Asante Kotoko- Inter Allies coach