Manchester United: Cristiano Ronaldo is considering Leaving at the end of the season

By Basswrite (self media writer) | 4 months ago

A new report says Cristiano Ronaldo will consider leaving Manchester United at the end of the season if the manager's choice doesn't suit him. Newsmen have claimed that Ronaldo, who just returned to the Red Devils from Juventus Turin this summer, is keeping a close eye on who the club names as the next permanent manager at the end of the season.

Ronaldo's contract at Old Trafford runs until 2023, but the report states that Ronaldo would be willing to hit that on the head 12 months early if the next appointment doesn't get the best out of him. Cristiano Ronaldo is reportedly weighing his future at Man United, according to new reports Ralf Rangnick (center) has temporary responsibility, but Ronaldo is said to have the next boss in mind. Rangnick "knew it would be difficult" to play at Manchester United.

United have only improved to a limited extent since the sacking of Ole Gunnar Solskjaer and the interim change of German coach Ralf Rangnick. The plan has always been for Rangnick to go behind the scenes at the end of the season and take on a role as Senior Football Advisor for the next two years.﻿ 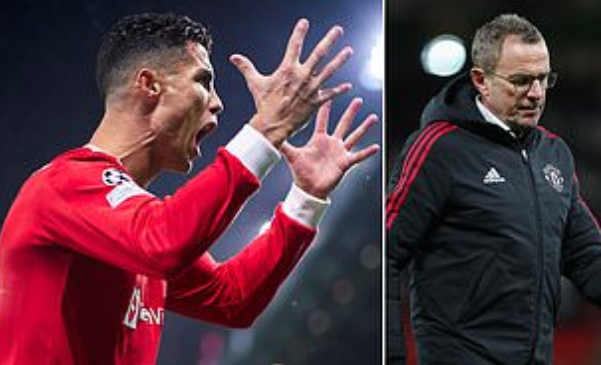 Even if Rangnick is not running for the post permanently, Ronaldo is said to have made his feelings clear that he would not support a decision to appoint the German full-time. A source told the star that Ronaldo "would be better than that" and that as a "born winner" he wants to "win more trophies".

Ronaldo has scored 14 goals since returning to Old Trafford but has also been criticized. Rangnick is likely to be part of the process to appoint the next manager, a permanent replacement for Solskjaer who was cut after a loss to Watford in November.

Chief Executive Officer Richard Arnold, who will replace Ed Woodward from February 1, also risks pissing off Ronaldo, who has 14 goals this season, if the decision is controversial. Newsmen reported Thursday that United is working on a three-man shortlist from Mauricio Pochettino, currently at Paris Saint-Germain, Ajax manager Erik ten Hag and Leicester City boss Brendan Rodgers.

Any new boss is likely to have to find a way to maximize Ronaldo as he hasn't been able to blend in with Rangnick's preferred 4-2-2-2 formation so far. The mood in the United dressing room has deteriorated significantly in the past few weeks until the Old Trafford squad faces a mass exodus of players if things don't change.

Reported has it that this week the club morale has hit rock bottom after interim boss Rangnick inherited a shared dressing room from Solskjaer, with a staggering 17 players unhappy. Many of them including several stars are under contract and not allowed to leave the country, but a significant number of departures are expected in the next eight months.

Rangnick became aware of the situation after a series of meetings with players to discuss their future. Anthony Martial is on loan this month, while Paul Pogba and Jesse Lingard have shown no inclination to renew their contracts, which are set to expire in late June.

Edinson Cavani, who is another free agent in the summer, has been told he will not be able to leave in January while Donny van de Beek, Dean Henderson and Eric Bailly are all unhappy with the lack of playing time and open to moves at the end of the game season