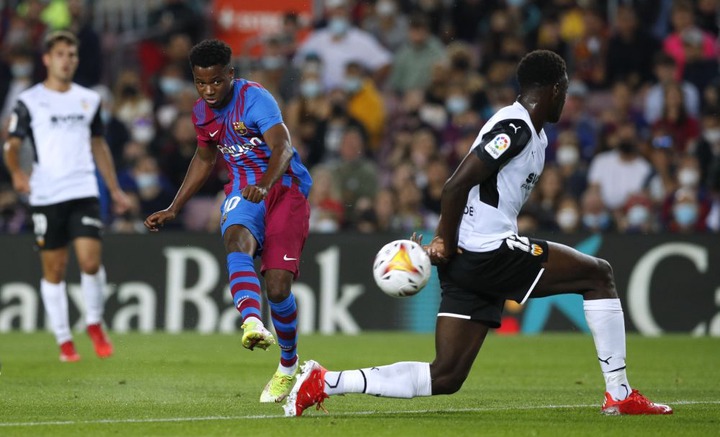 Anssumane Fati Viere ( born on 31 October 2002) is a professional player who plays as a forward for La Liga club Barcelona and the Spanish national team. He was born in Guinea Bissau but chose to play for the Spanish national team due to his stay at Herrera, Seville with his parent at the age of six years where Ansu spent his childhood life and started football training.

After presenting local side Herrera and the youth teams of Sevilla, he joined Barcelona's La Masia at age ten in 2012.

on 24 July 2019, Fati signed his professional contract with Barcelona, agreeing to a deal until 2022. He made his first-team and La Liga debut on 25 August and became the youngest player to play for Barcelona at age 16 years and 18 days older than Vicenc Martinez in 1941.

On 31 August 2019, he scored his professional goal for his club Barcelona, becoming the senior team's youngest goalscorer ever and the third youngest scorer in the history of La Liga in Spain. On 17 September, Fati made his Champions League debut at age 16, breaking the record holder Krkic Bojan and also the third-youngest ever to play in the competition. On 7 December, Ansu Fati became the youngest goalscorer in UEFA C Champions League at the age o 17 when he scored the winning goal at San Siro at Milan.

On 23 September 2020, Fati was officially promoted to the first team. He made his first 2020 and 2021 match debut and scored a brace under his new coach Ronald Koeman and scored again in the following match against Celta Vigo. His performance led him to be named the La Liga Player of the Month for September. He scored a goal in the Champions League against Ferencvaros, to become the first player to score more than one goal before turning 18. He also scored a goal in the defeat against Real Madrid and also made a record to become the second-youngest ever in El Clasico to score on 7 November, Fati suffered a knee injury against Real Betis and was substituted. It was confirmed that he tore the meniscus on his left knee. Days later he underwent surgery and announced that he will miss nine months and more. 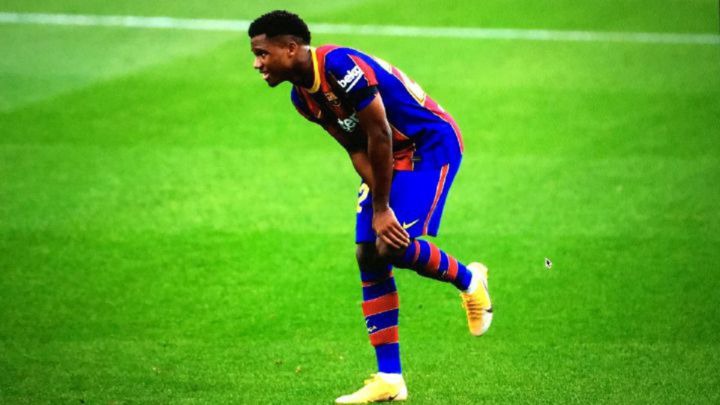 On 5 August 2021, Ansu Fati resumed training after a long spell knee injury at the Ciutat Esportiva after nine months out of action for Barcelona. Ansu Fati was given the number 10 jersey, with the hope to lead the Barcelona team after the departure of their captain Lionel Messi.

On 26 October, Fati made his first appearance after nine months of injury against Levente. he came on as a substitute, playing for 10 minutes and scores within that minutes.