These are the top Eleven(11) rated players in the La Liga this week according to statistics on sofa score based on 3-4-3 formation.

Stats: Dituro was very excellent for his as they beat Levante on an away trip by two(2) goals to nil. He made two(2) saves which include stopping a penalty and a save inside the box.

Stats: Barcelona playing a draw with a team like Cadiz is very shocking. However, Barcelona player Araujo did a very good job on the field as he eliminates threats from the home side.

Stats: Elustondo was very superb against Granada as he scored two(2) goals, cleared two(2) threats, blocked one(1) shot, and a successful tackle of one(1) which was enough for a win.

Stats: Betis playing against Osasuna was a very tough game but Betis showed a masterclass display and won 3-1. Which Hermoso contributed one(1), made five(5) clearances, blocked a shot, had two(2) shots, two(2) tackles, and pass accuracy of 83%.

Stats: Merino also contributed alongside his teammate Elustondo which make them victories against Granada. Merino had six(6) shots, four(4) on target which resulted in a goal, made two(2) key passes, three(3) clearances, a tackle, fouled twice(2), and accurate passes of 84%. A very excellent performance from him.

Stats: Madrid crashed RCD Mallorca by six(1) goals to one(1) of which Asensio scored three(3) goals, had five(5) shots on target, and a pass accuracy of 93%.

Stats: Vinicius Junior was also excellent as he provided an assist, made three(3) tackles, an interception, 91% pass accuracy, and total shots of four(4) which two(2) were on target.

Stats: Former Tottenham Star Lamela was on display for his new club as he made an assist, six(6) successful tackles, fouled thrice(3), created a big chance, had a shot on target, and made 88% accurate passes which were enough for a win against Valencia.

Stats: Benzema was also on fire against Mallorca as he scored two(2) goals, provided two(2) assists, had a shots attempt of four(4), created two(2) big chances, and a passes accuracy of 77%.

Stats: Atletico Madrid won 2-1 against Getafe on an away trip and all goals came from Suarez. He had three(3) shots on target which resulted in two(2) goals, fouled once, and made 75% accurate passes. 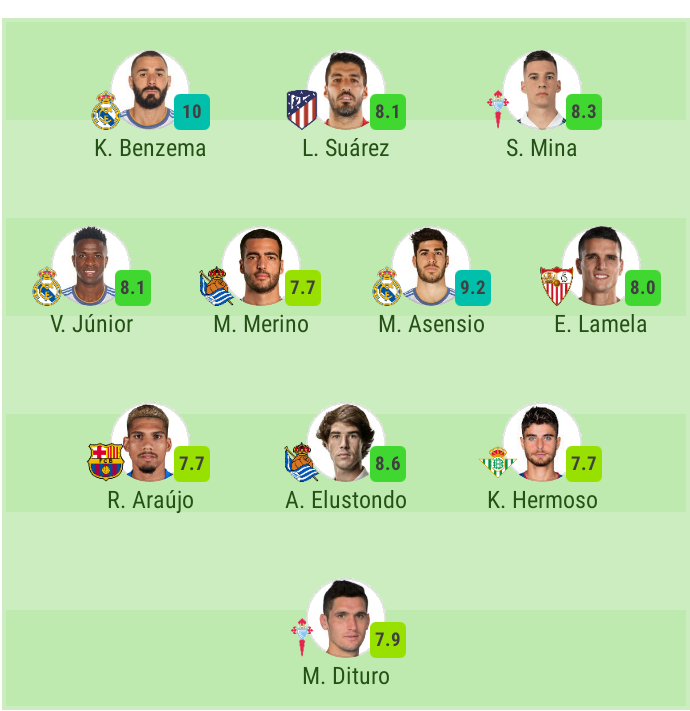