By ROLEXSTORMZY (self meida writer) | 1 months 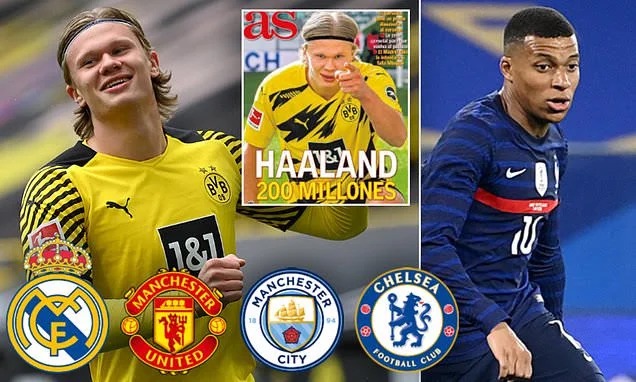 Borussia Dortmund is said to have increased their efforts to keep Erling Haaland at the club by asking for £172 million (€200 million).

After pushing his game to the next level at the Signal Iduna Park, Haaland has become one of the most sought-after players in the world.

Dortmund is now attempting to fend off interest from Premier League giants Manchester United, City, and Chelsea, as well as La Liga dynasty Real Madrid, according to Spanish daily AS.

Manchester rivals City and United have previously expressed an interest, with both clubs looking for a top-flight centre forward.

Chelsea, the newly crowned European champions, are also interested, however it is understood that German coach Thomas Tuchel is still willing to work on getting the best out of his compatriot Timo Werner, who the Blues paid £53 million for just a year ago.

Due to the devastating financial impacts of the coronavirus pandemic, Mbappe has been identified as the top target at the Santiago Bernabeu, with the cash-strapped Spaniards now unable to pull off a deal for both players. If Haaland stays at Dortmund, a release clause in his contract will come into play next summer, allowing teams to sign him for just under £70 million.

Ole Gunnar Solskjaer has been connected with a reunion with Haaland, with whom he previously worked at Molde, and the possibility of bringing the player to Old Trafford.

Pep Guardiola, meanwhile, is a fan of the young attacker but is thought to be focused on securing the acquisition of Tottenham's wantaway striker Harry Kane this summer