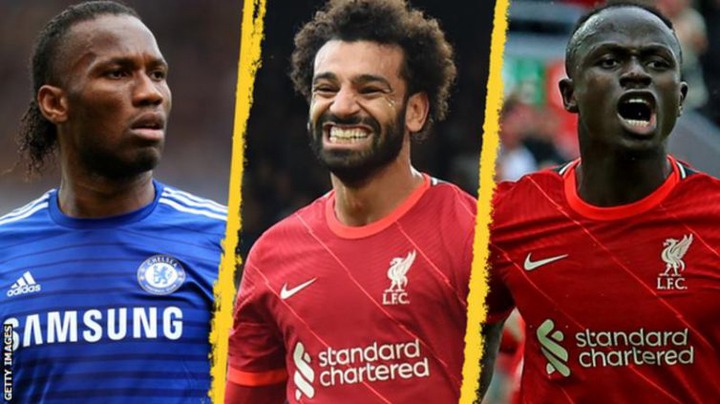 The Egyptian began the day equal with Chelsea and Ivory Coast legend Didier Drogba, who scored 104 goals for the London club in two periods before leaving for the second time in 2015.

Salah, however, not only eclipsed Drogba's record but also went clear on 107 goals after becoming the first away player to score a Premier League hat-trick at Manchester United in Liverpool's thrilling 5-0 triumph.

Salah, who previously played for the European champions, has established himself as one of the Premier League's most prolific strikers since joining Liverpool from Roma in 2017.

Salah, dubbed the 'Egyptian King' by Liverpool supporters, scored 19 goals as the Reds won the Premier League for the first time in 30 years last season.

The 29-year-old, who has been named BBC and Caf African Footballer of the Year twice, also scored the first goal in Liverpool's Champions League victory over Spurs in 2018-19.

Salah has not scored less than 15 league goals in each of his four seasons on Merseyside, a degree of consistency that has propelled him to the top of the African Premier League scoring chart.

He went to England from Basel in January 2014, but only scored twice in 13 league appearances for the Blues before two loan spells in Italy.

Yakubu stated, "He's very intelligent — his movement is fantastic." "Because he isn't a striker, he may play in the midfield or wide zones." It's all about movement: he knows where he wants to go and where he wants to be.

"Players like Salah are a unique breed in modern football, a true one-of-a-kind player." Lionel Messi of Barcelona and Mohamed Salah of Liverpool both make things happen for their respective clubs and have that enormous effect."

Following Roman Abramovich's takeover, Drogba's goals helped Chelsea end a 50-year drought for a league title and re-establish themselves as one of England's premier clubs.

In his first term at Stamford Bridge, he won three league titles, and in his second, he won a fourth.

Drogba is unquestionably a modern-day legend in west London, having played a key role in winning four FA Cups, three League Cups, and the Champions League in 2011-12.

"If you can't score goals in Chelsea, you're not cut out for the league," Yakubu added.

“You've seen so many top strikers struggle to score in Chelsea. They're not bad players, but the Premier League is difficult."

Mane first shone in the Premier League with Southampton, where he scored 21 goals in two seasons, including the fastest hat-trick in Premier League history.

Mane has teamed up with Salah to deliver the Premier League, Champions League, European Super Cup, and Fifa Club World Cup to Anfield since his arrival in 2016.

The reigning African Footballer of the Year, according to Yakubu, makes the most of his explosive pace and quick thinking.

He said, "Mane is swift." "He's all about being at the right place at the right time and being as smart as possible." You can't turn off when you're playing against him.

"In front of goal, he's also incredibly incisive." When you least expect it, your mane can appear in the most unexpected places. Salah and Mane have both shown that African players can perform at a high level in Europe."

Over a nine-year period, the Nigerian played for Portsmouth, Middlesbrough, Everton, and Blackburn Rovers, and believes his record compares favorably to his club's lower standings.

"I'll still be one of Africa's best strikers, even if those guys score more than 100 goals," he remarked. "Don't forget, they played for some of England's top clubs."

"It's also significant to score 15, 17 goals in Portsmouth, Middlesbrough, Everton, and Blackburn." In England, if you score 15 goals in a season as a striker, you have had a successful season.

"To scoring that many goals is an honor for me." I was wounded and had to sit out for a year. If I did, I would have received a score of above 100. I had opportunities, but the time had come for me to depart, so I moved to China."

In terms of contemporary players, Manchester City's Algerian striker Riyad Mahrez (67) and Arsenal's Gabonese striker Pierre-Emerick Aubameyang (66) both have a long way to go to challenge the top five.