Barcelona FC squad for the 2020/2021 season: players and manager The season is marked by the performance of Ter Stegen in goal, a consolidated central pair, the relief in the center of the field where De Jong has to take a step forward, a captain who could be before his last season and the young attackers who want to surprise.

All this will be controlled by Ronald Koeman, who wants to convince the new board of directors to come out of the next elections to continue being the culé coach and start a legacy on the Barça bench. 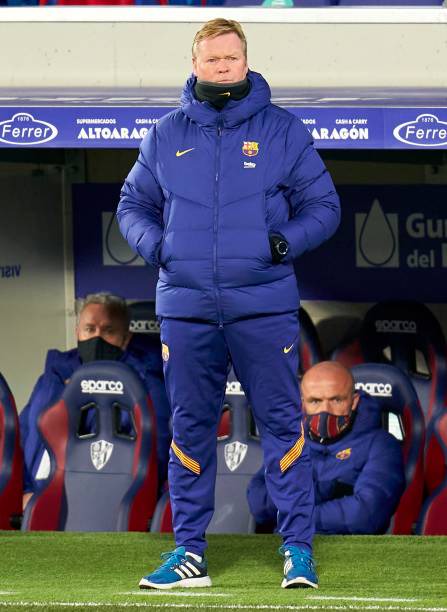 The one from Zaandam became the coach of the FC Barcelona first team in the summer of 2020 after the departure of Quique Setién. Previously, Koeman has been developing his skills on the bench at Vitesse, Ajax, Benfica, PSV, Valencia, AZ Alkmaar, Feyenoord, Southampton, Everton and on the Dutch national team. 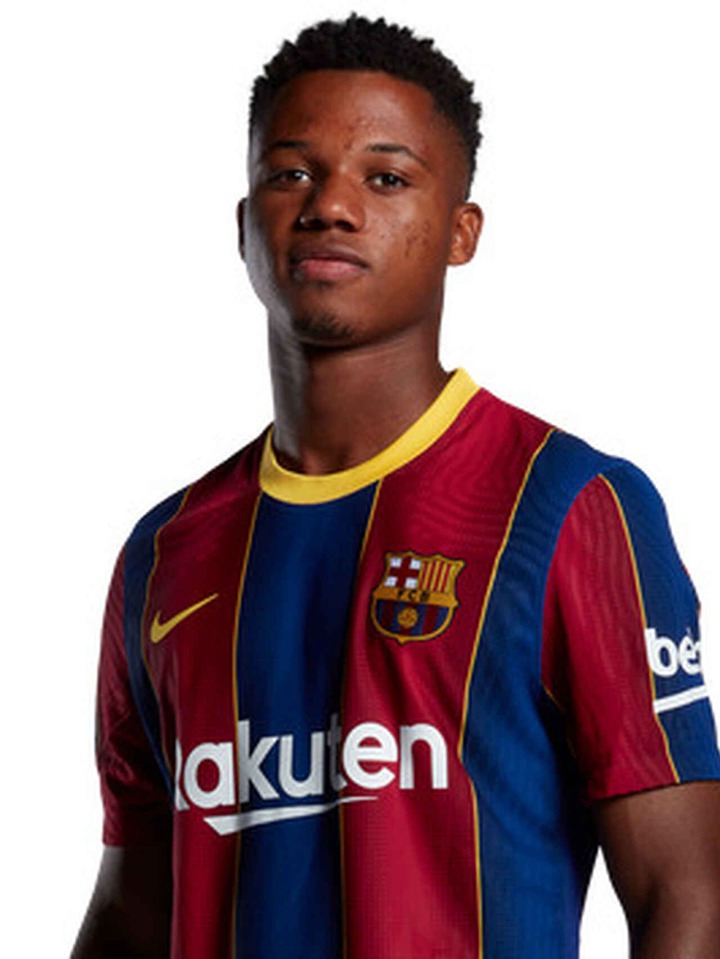 The capital player of the future of Barça. At 18 he is the reference of the team and is even overshadowing Leo Messi. The striker has shown his ability to break out, but above all, his scoring nose in the season and a half that he has established in the first team. Another of the 2020/2021 bets. The Portuguese was not cheap, but the fact of having a player of his projection convinced the sports management to make the payment. The ex of Sporting de Braga wants to settle this season in the culé squad. The Frenchman is one of the best young players in the world. At just 20 years old, the winger arrived at FC Barcelona on August 25, 2017, after having shown in the French league and in the German league that he is one of the footballers with the greatest capacity for imbalance. After the earthquake that caused his possible departure during the month of August 2020, the captain of the team will remain so at least until the end of the season. The Barça legend wants to continue this season by making it even bigger. Will it be your last year at Barça? From unforeseen arrival to wear the number '9' on the back. On February 20, 2020, Barça made its termination clause effective as a Leganés player to face the challenge of replacing an injured Luis Suárez. After the final departure of the Uruguayan, he is one of the team's references. Enrolled in one of the most expensive transfers in history, the Frenchman aims to succeed as a Barça player and achieve everything he could not achieve at Atlético de Madrid. He arrived at Barça in the summer of 2019, after a solid career in La Liga also thanks to his time at Real Sociedad. The Dutchman arrives at Barça in the summer of 2019 after a great campaign with Ajax Amsterdam, consolidating himself as a midfielder of the present and future. De Jong wants to show that he is that same player and that he can still develop new records that increase his value as a benchmark in the team. One of the Brazilian bets of the culé team. He arrived at Barça in the 2020 winter market, but left on loan to Valladolid for half a season. This season he has stayed to help in the first team waiting for opportunities in the face of the heavy load of games that this season entails. The big reveal of the season. Pedri, born in Tegueste, Tenerife, on November 25, 2002, arrived this summer at the Culé entity where he is consolidating even in the starting eleven. The canary has a great quality that allows him to play both on the band and inside. After his assignment at Bayern, Ronald Koeman has the Brazilian player for this year as one of the important ones. Philippe Coutinho is one of the most talented midfielders in the world. The Brazilian has already shown his class at the highest level, both in Brazil and at Liverpool. The great hope of the culé quarry for the center of the field. Last year he remained in the first team permanently and is one of the pearls that the club takes the most care of. Since his debut in 2019/2020, the illusion of Barcelona fans has been on this teenager. After having established himself as one of Juventus' benchmark players, he arrived in Barcelona last summer to demonstrate his quality in midfield. It is the relief of Arthur Melo and comes to give experience to a very young midfield. Another youth squad ready to fight. Alena, born in Mataró on January 5, 1998, is a different midfielder. He left on loan for the 2019/2020 season and, after the experience at Betis, he returned to try to consolidate himself in the squad. Since he was chosen by Pep Guardiola for midfield, no one has taken him away. Born in Sabadell on July 16, 1988, the son of Carlos Busquets, FC Barcelona goalkeeper in the 90s, arrived in Barça's training football in the summer of 2005 from Jàbac. He has won everything a footballer can win.

Bet for the left side of Barça. This U21 international with the Spanish team, despite being born in the Dominican Republic, arrived in 2019 from Betis. Junior is destined to be Jordi Alba's natural replacement when the Catalan steps aside. Samuel Umtiti signed for FC Barcelona on July 14, 2016 as a bet on the present and future in the project that Luis Enrique was leading at that time. The Frenchman of Cameroonian origin landed from Olympique de Lyon and would complete a very good first season. The physical problems have been marking his career until leaving him out of the game. 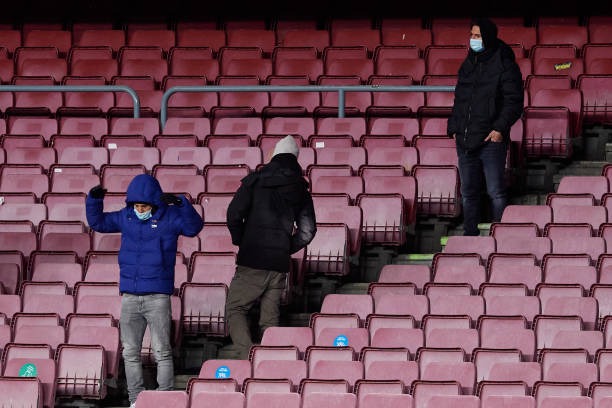 Sergi Roberto left Reus at age 14 to stomp on Barça's Masia. The culés took over his services after a stage at the Nàstic de Tarragona. The midfielder was consolidating stage after stage until he became a permanent fixture in the scheme of the subsidiary led by Luis Enrique. When he moved to the first team, he also started playing as a right back, his natural position today. In 2012 he would return to the culé entity from Valencia CF. Jordi Alba Ramos returned to FC Barcelona in his second and final stage as a Barça player. Born in Hospitalet de Llobregat on March 21, 1989, the full-back had already been for more than seven years in the lower categories of Barça, from where he came out before the attractive bet of the team. On July 13, 2018, Clément Lenglet was presented as a new FC Barcelona player from Sevilla. He was born in Beauvais, France, from where he moved to Nancy to take his first steps as a professional footballer. The Seville team noticed him to land in Spain. Later the Barcelona team made an important bet for him. Ronald Araujo was born in Rivera, Uruguay, on March 7, 1999. The young central defender takes his first steps as a professional in his hometown team, before moving to the lower categories of Rentistas, a team in Uruguay's Second Division . Then he caught the attention of the Catalans who recruited him for Barça B in 2018. Gerard Piqué is one of the team captains. He was born in Barcelona on February 2, 1987 and from that day he became a member of the club. At the age of 10, he started in grassroots football in the first of the categories that existed at that time, Alevín B. Since then he has won Champions, Leagues and Cups, in addition to accumulating successes with the National Team during that period. On October 1, 2020, Ajax and FC Barcelona reached an agreement for the arrival of Sergino Dest to the team. At the age of 19, the Catalans made a commitment to project the future. The right-back landed after consolidating in the Dutch team during the 2019/2020 season. Norberto Murara 'Neto' (July 19, 1989) arrived at FC Barcelona on June 27, 2019. Before his arrival in Barcelona, ​​the goalkeeper born in Araxá had chained outstanding performances defending the goals of Valencia, Juventus and Fiorentina. Marc-André ter Stegen arrived at FC Barcelona's goal in the summer of 2014 from Borussia Mönchengladbach. Born on April 30, 1992 in the town with the same team name, the German stood out from a very young age as one of the most promising goalkeepers on the European continent. Now he has settled in the Barça goal where he has recently renewed until 2025