Check Out The Most Valuable Clubs In The World

Football is a business. From the board, management, coaching staff to the playing body, it's also about the money like any other business venture. If a club performs well, it increases the value of it's players hence the valuation of the club. The most expensive player in the world is Neymar da Silva Junior. He was sold from Barcelona to Paris Saint Germain at 222 million Euros. We have seen the value of players rise after their tremendous individual performances and for the club. Players like Alexander Arnold, Jason Sancho, Robertson, Alphonso Davies, Gnabry, Coman, Salah, Mané, Harry Kane, Haaland, De Bryune and many more rise in their value.

Let's look at the impact of their values on their individual clubs.

Liverpool has the most expensive squad valued at €1.10 billion. Their most expensive player is Mohammed Salah. Other players like Mané, Van Dijk, Arnold, and Robertson count for this valuation.

Manchester City is next. Manchester City has been one of the most consistent clubs in the world. They win at least a trophy every season from the past decade. Their most expensive player is Kelvin De Bryune.

Barcelona is next. Despite their struggles in the past two years, they remain an elite club. They have players in their squad that are expensive like Messi, Greizman, Dembele, and Frank de Hong.

Next is Bayern Munich. The record German champions have been exciting to watch from the past year. They won the sextuple last season. This is a record only Barcelona achieved in 2009. Their most expensive player is Robert Lewandowski.

Real Madrid follows as fifth. They are noted for buying expensive players over years but after the departure of Cristiano Ronaldo things seem to be different. Their most expensive player is Eden Hazard.

Check out the flyer for more. 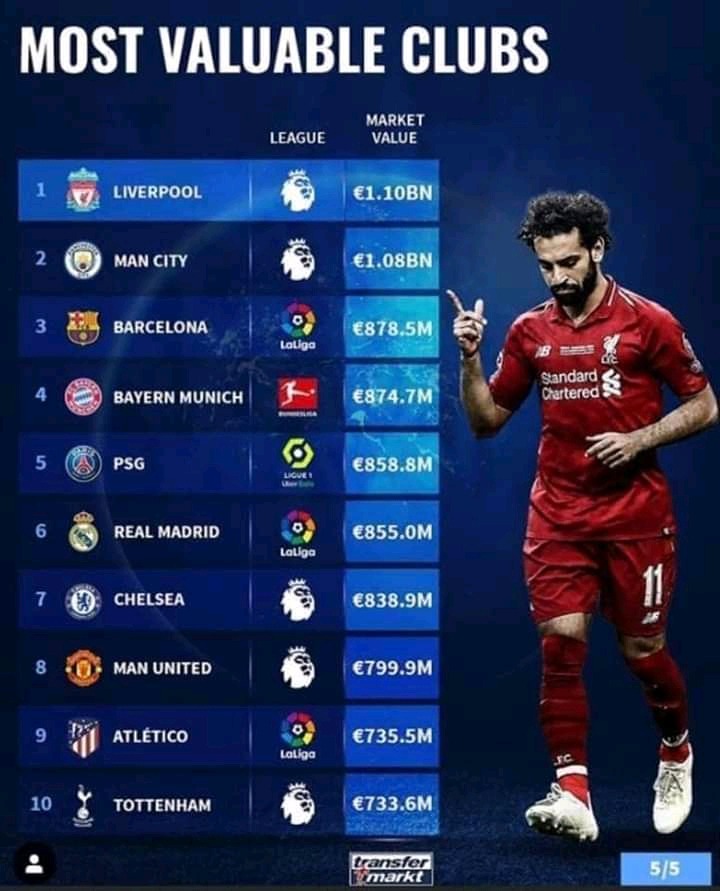